XenosParodies, originally known as TheXenomorph1, or "Xeno", and MHXDownfall, was an Indonesian Unterganger. He was known for his numerous crossover parodies (including but not limited to Downfall/Aliens vs. Predator crossovers, hence his username) and various other parodies, but he retired due to pressure from trolls and personal issues.

He became mildly controversial within the community, alongside members such as Giuguletzu (who was actually a fan of his work). This is because he was prone to frequently rant about being "betrayed" by other untergangers when they had disagreements, suicide his account several times due to aforementioned problems (as well as issues with trolls) etc.

Information on his past parodies can be found here, his last edit to this page prior to the blanking of this page by himself. 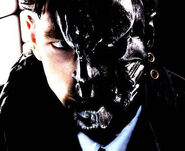 A promotional photo of Tetsuo: The Bullet Man featuring the main protagonist, used by XenosParodies at some point during his career.
Add a photo to this gallery

Retrieved from "https://hitlerparody.fandom.com/wiki/XenosParodies?oldid=70739"
Community content is available under CC-BY-SA unless otherwise noted.