Start a Wiki
“God would never be cruel enough to create a cyclone as terrible as that Argonne battle. Only man would ever think of doing an awful thing like that.”
―Alvin C. York on the Meuse-Argonne offensive
“The First World War killed fewer victims than the Second World War, destroyed fewer buildings, and uprooted millions instead of tens of millions — but in many ways it left even deeper scars both on the mind and on the map of Europe. The old world never recovered from the shock.”
―Edmond Taylor on WWI
“The Führer always said we don't surrender. November 1918 will not be repeated!”
―Wilhelm Keitel

World War I (shortened WW1 or WWI) was a conflict lasted from 1914 to 1918 that occurred following the Balkan Wars and the assassination of Franz Ferdinand. The war subsequently resulted with (possibly) the Russian Revolution, (obviously) Hitler's rise to power and World War II. It was often called "the war to end all wars" which is indeed (and obviously) incorrect; even to this day, wars are extremely prone to occur everywhere.

Hitler himself (The real real guy, not this guy) saw WWI as one of the best periods of his life, as his otherwise aimless life served a purpose there. Before the war, he was a homeless drifter, barely scraping by with small jobs. Therefore, when he heard Germany surrendered, he took this personal and felt he wanted to right all wrongs here. This is the start of his rise to power, WWII, Der Untergang and, off course, all the subsequent parodies and this very wiki.

The impact of this war can still be seen today, as it marked the end of the age of the large hereditery empires. After the war, the curtain fell for the German Empire, Austro-Hungarian Empire, Ottoman Empire and Tsarist Russia. The governments of these empires turned into republics for the most part (Russia wanted to try out some new trend called Communism).  A large amount of national borders were also rearranged, sparking the rise of new nation states, many of which were carved from the remnants of the old empires.

The First World War is rather uncommon amongst the parodies, to the point of even completely absent from the Parody Universe. This is remarkable, because many real life counterparts to the Downfall Parody characters, such as Hans Krebs, Alfred Jodl, Hermann Göring, and even Adolf Hitler himself, actively fought in the First World War, making it a defining moment in their life. The aftermath of this war is also a major factor leading up to the events of World War 2. It can be assumed that World War One is absent from the parodies because events of this war are not known by many people and there is no real fun way to utilize it in the Parody universe.

FegelCineplex has considered making a surreal parody miniseries about the Downfall Hitler's experiences in a slightly-altered WWI, but due to his dormancy and implied retirement, this never came to fruition. 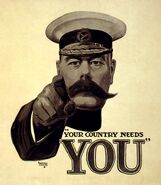 You, get back in the kitchen!

Axis Power leaders during the time of the Great War.
Add a photo to this gallery
This article is a stub, seriously. Go and press the "Edit" button so you can help expanding it. If you don't do it you will become a victim of a Fegel-antic!
Retrieved from "https://hitlerparody.fandom.com/wiki/World_War_I?oldid=84438"
Community content is available under CC-BY-SA unless otherwise noted.