Mohnke was born in Lübeck on 15 March 1911. His father, who shared his name with his son, was a cabinetmaker. After his father's death, he went to work for a glass and porcelain manufacturer, eventually reaching a management position. Mohnke joined the Nazi Party on 1 September 1931 and the SS two months later. He began with the rank of SS-Mann (Private).

During the Battle of Berlin, he was tasked with defending the government quarter. While the Battle in Berlin raged on around them, Hitler ordered Mohnke to set up a military tribunal for Hermann Fegelein, adjutant to Heinrich Himmler, in order to try the man for desertion.

Mohnke surrendered to the Soviet Armed Forces on 2 May 1945, along with the rest of the capital's garrison. He was held in captivity until 1955 and later lived in Germany. Although he was blamed for the massacre of 100 British and French POW's in 1940, he was never prosecuted.

When Operation Clausewitz take effect, Mohnke is put in charge of the defence of the government district. During his duty, he saw Volkssturm members, who are under Goebbels' command, being mowed down by the advancing Soviets. To this he retreated to the Führerbunker to report to Goebbels that the old men are basically being cannon fodder, but Skeletor blames the people instead for putting the Nazis in charge. Later, he contacted Ernst-Günther Schenck requesting him to bring all medical supplies he can find to the shelter beneath the Reich Chancellery. Returning to the frontline for a while, he makes another trip to the bunker when his adjutant is hit by artillery shrapnel to report to Hitler that the defence forces can only last a few days, although at that point Hitler was already disheartened.

After the death of Hitler and Goebbels, Mohnke rounds up the remaining forces and most bunker occupants to try and make a breakthrough to the West, snaking through the U-bahn tunnels part of the way. At a river crossing, the group split into two, and one group was attacked by the Soviets. The remaining members gather in a plaza where they decide to stop and let fate catch up with them. Only Traudl continues with the escape, accompanied by Peter Kranz - however, this is fictional.

In the Downfall Parody Universe, Mohnke - portrayed by actor André Hennicke - does not really do much, except of pointing out how it's all hopeless and standing with a dumb-struck expression, however, in "The Bunker Civil War" (a theme of some of Benad361's parodies) he joined the rebellion, exasperated at the mockery of his name as "Bonkers" by the Führer and others, and looking for a way out. He also has good skills at map pointing.

At some point he ends up replacing Jodl, because Hitler was tired of hearing Jodl object to his plans. Mohnke does not object to Hitlers new 'Global domination' plan. Though the plan ends up unsuccessful and Mohnke reconsiders the plan by cancelling it, leading Jodl to be rehired.

More noticeably, Mohnke is one of the few Downfall parody characters who Hitler never shouts at or rants about, mainly because he never objects to Hitler's plans and approves them, unlike Jodl. This would make him Hitler's unofficial yes-man. However, in HRP's more recent parodies, Mohnke HAS been shouted at, so he's no longer as "unrantable" as before.

In nietzscheprime's parodies, Mohnke is featured in his own segment called, Mohnkepedia, which is another version of Lingepedia, only more offensive and controversial.

Mohnke shows exceptional dexterity at map pointing. He is the only known person shown to point with two fingers, and with arguably more precision. Whether his skill even exceeds that of Krebs, who so far has only been shown pointing with one finger, is currently unknown.

In Vincentalot-XD Elite's Jodl Wright-Reich Attorney parody series, he was the witness when Burgdorf's Boozing Table was said to be kidnapped by Hitler but was revealed in the end that he himself was the kidnapper and was sentenced guilty.

A running gag with this character is that Hitler never seems to get his name right. When Hitler greets Mohnke, he always comes up with some embarrassing nickname, like Mr. Monkey, Mohnkey or Bonkers, which Mohnke usually accepts stoically. 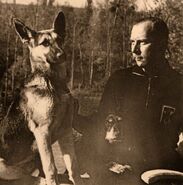 Retrieved from "https://hitlerparody.fandom.com/wiki/Wilhelm_Mohnke?oldid=84945"
Community content is available under CC-BY-SA unless otherwise noted.