In the Spanish Dolfy parodies

The eldest grandchild of Queen Victoria, Wilhelm's first cousins included King George V of the United Kingdom and many princesses who, along with Wilhelm's sister Sophia, became European consorts. For most of his life before becoming emperor, he was second in line to succeed his grandfather Wilhelm I on the German and Prussian thrones after his father, Crown Prince Frederick. His grandfather and father both died in 1888, the Year of Three Emperors, making Wilhelm emperor and king. He dismissed the country's longtime chancellor, Otto von Bismarck, in 1890.

Wilhelm launched Germany on a bellicose "New Course" to cement its status as a respected world power. However, due to his impetuous personality, he frequently undermined this aim by making tactless, alarming public statements without consulting his ministers beforehand. He also did much to alienate other Great Powers from Germany by initiating a massive build-up of the German Navy, challenging French control over Morocco, and backing the Austrian annexation of Bosnia in 1908. His turbulent reign culminated in his guarantee of military support to Austria-Hungary during the crisis of July 1914, which resulted in the outbreak of World War I. A lax wartime leader, he left virtually all decision-making regarding military strategy and organisation of the war effort in the hands of the German General Staff. This broad delegation of authority gave rise to a de facto military dictatorship whose authorisation of unrestricted submarine warfare and the Zimmerman Telegram led to the United States' entry into the conflict in April 1917. Losing the support of the German army, Wilhelm abdicated and fled to exile in the Netherlands, where he died in 1941.

He is another ranting leader like Adolf Hitler or Joseph Stalin. Like them he has his own antic master, the german chancellor Max von Baden.

Spanish Dolfy made a parody on September 1st 2019 in which the Kaiser meets Dolfy and they become friends. 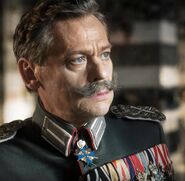 Before being the Kaiser he was Goebbels

Kaiser Willie in Hearts of Iron

Wilhelm II in Kingsman
Add a photo to this gallery

This man is crazy...

Retrieved from "https://hitlerparody.fandom.com/wiki/Wilhelm_II_of_Germany?oldid=83497"
Community content is available under CC-BY-SA unless otherwise noted.