The Westboro Baptist Church is a church founded in Topeka, Kansas, in 1955. In recent years, they have become despised for protesting at funerals of soldiers killed in action and civilians killed by terror attacks or natural disasters. They claim that the victims' deaths were brought on by homosexuals and Jews, and were "rightly deserved". These actions have brought them the acrimony of the vast majority of the populace, and even drew the ire of other hate groups such as the Ku Klux Klan, and gangs such as the Hell's Angels, both of them denouncing the "church".

The Westboros appeared in a parody by Soalric. When Hitler explains to Günsche about the church and how evil they are, the latter remarks that he should "teach them a lesson." Inspired by the remark, Hitler resolves to destroy the Westboros, resulting in a dramatically-shocking twist when he asks Fegelein to help in the plot. The two agree to temporarily collaborate, and they end up successfully eliminating the church at one of their protests.

The Westboro Baptists are hated for praising terror attacks and natural disasters as "acts of God". 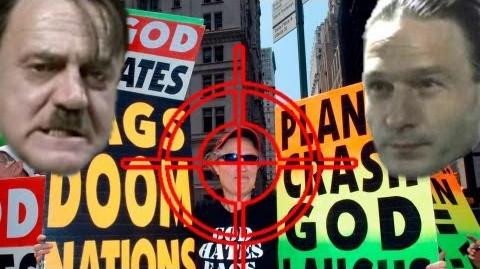 Hitler Destroys the Westboro Baptist Church
Hitler Destroys the Westboro Baptist Church
Add a photo to this gallery
This article is a stub, seriously. Go and press the "Edit" button so you can help expanding it. If you don't do it you will become a victim of a Fegel-antic!
Retrieved from "https://hitlerparody.fandom.com/wiki/Westboro_Baptist_Church?oldid=58171"
Community content is available under CC-BY-SA unless otherwise noted.