Vgrx (also known as VgRemixVideos) is an American second-generation Unterganger who is known for making DPMVs. Prior to his first channel closure, he had 899 subscribers and over 150,000 views.

Vgrx first started making YTPMVs in 2011. He is a MLP fan who had a channel dedicated to MLP YTPMVs only (later closed for reasons not stated). This led him to seek out a new source. In mid 2013, he stumbled across "Hitler gets banned from Xbox Live". He later became self-motivated to try out the source. His first Downfall parody with a DPMV of "Blue (Da Ba Dee)" on July 25, 2013, making him one of the last second-generation Untergangers.

After making a few more DPMVs, the last video being released on November 19, 2013 called "[DPMV] League of Downfall" (deleted by YouTube), he went inactive for a year and a half. He later reveals that he had computer issues that prevented him from making videos during that time-span. On May 17, 2015, he made Hitler's Bazaar (Legend of Zelda), a DPMV of the shop music from Ocarina of Time. He has since made DPMVs regularly.

He has won an Unterganger Award in October 2013 for best musical parody, which was a parody of "What does the Fox say?", a DPMV later unlisted and remade, and also one in June 2015 in the same category with a parody of Katy Perry's "Roar". He has won several awards since then.

Following the release of his intended entry to the Hitler Tunes DPMV Contest, he announced his retirement, citing that the community was horrible and he wanted nothing to do with it. This was seen when many Untergangers pleaded against giving Vgrx the invite link for the Downfall Parodies Society Discord for an incident that occurred a long time ago.

In May 2017, Vgrx decided to come back to the Unterganger community. He created a new channel and uploaded a new DPMV on May 3, 2017.

As of July 28th, 2019, Vgrx deleted his channel, only this channel exists which "is dedicated to reuploading the videos of the user 元首Rap Vgrx who closed his channel"  according to the about page.

His parodies are 100% dedicated to DPMVs and YTPMVs.

“I try to stand out from the rest.”
―Vgrx 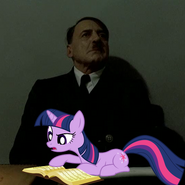 Vgrx's 2nd avatar
Add a photo to this gallery

Retrieved from "https://hitlerparody.fandom.com/wiki/Vgrx?oldid=82889"
Community content is available under CC-BY-SA unless otherwise noted.