Start a Wiki
Note: Check out the UMS Wiki for more in-depth and up-to-date information regarding the Unterganger Minecraft Server!

The Unterganger Minecraft Server (or shortly UMS) is a privately hosted Minecraft server originally set up and ran by Unterganger DictatorAntics. It has since been hosted on a private server by first Johnnomonster, then PotatoParodies then Nerdington 0 and is currently owned by QuestionTuesdayFTW.

The UMS was founded around June 2013 by DictatorAntics and was hosted from his personal computer. Development on the server was initially centered around the spawn point and what would later become known as the Unterganger City. As of then, players would connect to the server by joining a virtual private network on Hamachi that was set up by DictatorAntics upon request and his discretion. This solution was problematic as users would either have problems with configuring Hamachi or have the LAN drivers installed by it cause problems on their system.

Beginning 4 February 2014, users began experiencing "io.netty" timeouts when trying to connect to the server and eventually, not being able to connect at all. Several theories were brought up on whether the server became corrupted, what caused it (the most popular theory was DA's laptop charger malfunction happening on the same day the timeouts started) and how to fix it. After a week of trials and errors, MTM and John managed to get the world to load, but it was still unstable and crashed occasionally. 0n 19 Feb 2014 mfaizsyahmi finally get the world to run without crashing. The root cause of the problem was attributed to 40,000 porkchops in one chunk spawned by one of MTM's contraptions that overloaded MC as well as any external editor from which fixing attempts were made. This has since been resolved.

As an indirect result of the aforementioned incident and DictatorAntics losing the motivation to continue hosting the server after the frustration that the incident caused him (See Issues, it is now hosted on a paid server by Johnnomonster, who the details to connect can be requested from in agreement to keep them non-disclosed and by his discretion. The paid hosting has been paid for by Johnnomonster and DictatorAntics

The UMS was run by RDP from August 2015 to August 2018. He was superseded by Nerd. After a year owning the server, Nerd handed it over to QuestionTuesdayFTW in August 2019.

After the server was founded in June 2013, KnightTemplar1453 and Johnnomonster were the first players on the server other than founder DictatorAntics. Mfaizsyahmi joined the server shortly after the founding as a new player to Minecraft in general, but quickly became an advanced frequent player and was promoted to an OP along with MisterTalkingMachine.

Upon the move to a dedicated server, many more players have since joined, such as TFPStudios, Delphox, and Venkyra21.

As of July 2016, many players are either infrequent visitors or have quit the server entirely. Some of the most active players include PotatoParodies, QuestionTuesdayFTW, and Nerdington 0.

For more information, refer to the Players category on the UMS wiki.

DictatorAntics named the first 'city' on the server "Unterganger City". The city steadily expanded and currently has many flags of the countries of the Untergangers on the server. The city was traditionally divided into three districts. However, as one was greatly expanded in an over-ambitious plan, and another lacked growth, only one district remained relevant. These districts have since been abolished in favour of more modern districts. Throughout the rest of this article, "City" refers to Unterganger City.

The old districts were the Old Town, the Nazi District, and the Imperial District. The Old Town contained an assortment of buildings, such as John's HUE Tower and MTM's Victor Building. Many towns were considered enclaves of the Old Town. The Nazi District was the attempted recreation of the Third Reich and its capital, Berlin. It was the most neglected of the three districts. The Imperial District was where buildings resembling a real-life city were built.

A more ambitious plan was hatched by KT around November 2013. It involved incorporating the former Imperial District as one district of a vastly larger City of Athyras that contains various other districts. Massive land-clearing work had been made in MCEdit, and major roads and a few buildings have been built, although progress had slowed down due either to lack of motivation or the interest in building other structures outside the city. Also, because of the name, the size and the build restriction placed upon vast swaths of land some players felt that the City of Athyras is a separate city from the City, and thus the distinction made in this article.

Surrounding the two cities are undeveloped wilderness, dotted with various generated structures that include desert temples (aka pyramids), jungle temples (only two have been found so far) and villages (Both naturally generated and man-made). Due to the new terrain generation in Minecraft 1.7.2 chunk errors or generation border as they are called can be found in all directions, approximately 1000m from the Unterganger City center.

Two of the oldest villages discovered (and closest to the city proper) are named East Village and Southville, named after their relative position to the city. East Village, being closer of the two had been razed to make way for the City's expansion. In the plains to the north three more villages have been found, and have been connected by rail to the City.

One village, called Deepwood Motte, was built to the south, it's a medieval-themed settlement built around a small frozen lake surrounded by walls and connected to Southville via railroad.

A large number of temples can be found in the server world. Those within 1000m radius of the city has been explored, named and connected to the City via rails. They were named after Untergangers that were thought of as prominent such as KakashiBallZ, Vzorkic, 20EuroCent and MOTURK49. All of these temples are desert temples (pyramids), with the exception of a couple of jungle temples named instead after the person finding it (mfaizsyahmi) and FegeleinTheLostTapes (Fegelein The Lost Temple). Unfortunately, a pyramid was accidentally deleted when DA levelled out the land for Athyras' expansion.

Many buildings, cities, and pixel arts have since been built on the outskirts of the City.

“Starting that cursed server was a big mistake”
―DictatorAntics
In January 2014, and particularly since the beginning of February, founder DictatorAntics had become frustrated by the server and also some users of it. His motivation to create things on the server went downwards, but nonetheless he still often encountered Untergangers discussing Minecraft in the Untergangers Chat, and it was also brought up to him on his Skype account. His real frustration, however, started to rise during the timeout issues that started on the 4th of February. Even though he stated multiple times that he is too busy to fix the server, he often was pestered with it despite spending hours in attempts to fix the server without success. He later gave the server files to a select few players of the server in an attempt to diagnose the problem, of which was successful.

During a visit to the Untergangers Chat, he tried to discuss the Parody of the Month, but was completely ignored, and an ongoing discussion about Minecraft temples continued, which resulted in him deciding to leave the Chat for about a week. As he was normally a frequent visitor, some speculated he was in a bad mood and not his usual self. It happened to coincide with the reopening of the server, which was the main reason for more discussion of the server than usual. After his departure, an anonymous source informed him that after he left, rude remarks were made about him, and that one user of the chat had vandalized one of his creations on the server. This was in spite of many players warning that player not to, as it was highly disrespectful. The creations have been mostly restored and the player who performed the actions was banned. Said anonymous source also claimed that it was 'hypocritical' of the server players to discuss it very frequently in the chat, since most of them are moderators and thus should "know better that game talk should be kept moderate;" he also speculated that some players were addicted to the game. However, it may be considered as an 'exaggeration' with many players holding the belief that he was overwhelmed by pressure put upon him to fix the server.

On 24 February 2014, DictatorAntics had visited the chat to discuss this issue, of when a few had apologised to him for putting too much pressure upon him to fix the server. They reassured him that with the server no longer having to be hosted by him, he would no longer have to deal with server-related matters. The day of which he decided to leave the chat until the next week happened to be the date which the server downtime has been resolved; the reason for the chat being 'overrun' by discussion of the server had been attributed to mostly excitement for the reopening and new hosting of the server. The issue has since been resolved.

The server has a set of rules and etiquette that players should keep in mind while on the server. In the past, if any of the rules were broken by a player but not severe enough to warrant a ban, they would be teleported to the courthouse where they are sentenced for a certain amount of minutes to a prison. In the prison they can still chat with the other players but obviously, not build anything. As of recent, the courthouse has not been used for enforcing rules and instead, warnings are issued to a player if the rule violation is minor, else, the player would be banned for a fixed amount of time.

The full set of rules can be viewed on the Rules and Etiquette article on the UMS Wiki.

Operator privellege is given to a select number of users based on trust and justifiable reasons.

For more information, refer to the Ops category on the UMS Wiki.

This list may not be accurate and is likely to be out-of-date. For up-to-date information, refer to the UMS Wiki.

Castle. KT's penis sculpture can be seen in the background at left.

Glass tower. Not much glass now.

"KFC in a nutshell", part of John's former vanity torture contraptions. The former Penis Museum can be seen at the background. (demolished 14 Oct 13)

Land office, with a large tiled map of the City at the entrance

Temple of the Hall of Fame

Left: Standart teleporter design. Right: Teleporter at the UMS headquarters under constrution.
Add a photo to this gallery

Replica of the Mausoleum at Halicarnassus

The military barracks, along with the archery range in the foreground

Town hall
Add a photo to this gallery

Only 90's kids remember this house.

A section of the railway network

Diagram of the transit network. by mfaizsyahmi

The teleporter station, with it's current 6 teleporters
Add a photo to this gallery

Around the server there are various sculptures intended for decoration, as these can be found as inside both cities as in the outskirts, they are listed as separate on these charts:

Snapshot taken at the same location. Notice the new developments since

Aerial view of the old town (not fully rendered).

Flags of countries of Untergangers in the server

Large detailed map of the whole city and its environs

Inside of the mailcart station. Coloured wools correspond to recipient's address

Inside of the Temple of the Hall of Fame 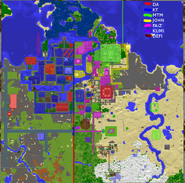 Colour-coded overlay indicating the builders of structures around the city

The new flagstaff row in front of the spleef arena

Unterganger City in 2018.
Add a photo to this gallery

Large-scale map of the server with the location of the city, surrounding biomes and the pre/post1.7.2 terrain generation border 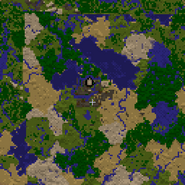 Large-scale map of the server

Abandoned desert market, thought to be a natural structure by some users, untill claimed by MTM on november 2013.

Delphox.
Add a photo to this gallery