Rotoscoping is an animation technique in which animators trace over live-action film movement, frame by frame, for use in animated films. In the visual effects industry, the term refers to the technique of making a matte mask in order to isolate elements from one scene for it to be composited on another background.

This technique is less commonly used by FX-based Untergangers, as it can be a lot more time consuming than using chroma keying, although given some skill and patience it can produce more satisfying results compared to using chroma filters. The Pro editions of Sony Vegas, Adobe After Effects and a few other video editing suites allow for this via the Mask or other similarly-named tools, such as the rotobrush tool.

An example rotoscoping job in Sony Vegas. Above is the original footage, the one in the middle is the footage being masked in Vegas, and the final composite image below.
Add a photo to this gallery 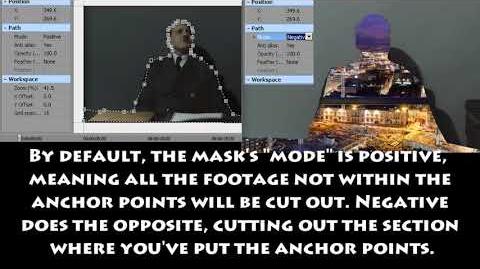 WonkyTonkBotty's Downfall Parody Rotoscoping Chroma-Keying Tutorial for Vegas Pro!
An in depth video tutorial on rotoscoping by WonkyTonkBotty.
Add a photo to this gallery
Retrieved from "https://hitlerparody.fandom.com/wiki/Tutorial:Rotoscoping?oldid=85266"
Community content is available under CC-BY-SA unless otherwise noted.