TheSilverUniverse posted his first Downfall parody on his main channel on the 18th of January 2010 and it was about him trying to get his account "silversame" back after a couple of days of suspension. However his first parody was uploaded on December 3rd 2009 on his previous channel. He started slowly gaining popularity, and then suddenly his videos, "Hitler is informed that he's going to explode," and "Hitler's stuck on the moon," started getting a lot of views after three months of being uploaded.

TheSilverUniverse remained under the radar for a long time until late 2010. His earliest parodies were of sub-par quality, both humor and quality-wise, the main reason being his lack of experience with special effects and poor English skills.

2011 was when the special effects in his parodies really started to evolve into more complex animations and techniques. In December 2011 he got After Effects CS5.5 and discovered rotoscoping, due to which soon after the first of his Downfall Parodies Green Screen Packs was released on December 29th 2011.

2012 started with problems for TheSilverUniverse as he became bored of parodies and he retired for 3 months from February to late May, only to come back later with better with more motivation to try and evolve his work in to better and bigger parodies. That's when he decided to focus on the story on the parodies first and then have the special effects later. Out of that idea came The Llama Priest series. His post-comeback parodies are so phenomenal that he became the first to ever win Benad361's Unterganger of the Month contest three times in a row and had his parodies won Master Studios' Parody of the Month contest three times. This results in him being inducted into the judging panel of both contests. He later went to organize the Unterganger Awards for quite some time, as a result of the Downfall Parody Awards' favouritism controversy.

That year also saw the premiere of Bunker Kombat, a Mortal Kombat parody game released to the public on the 16th of December 2012.

2013 followed with ever increasing skills in video editing and effects. From that year such parodies like Hitler's Shining, Hitler the cyclops (which replaced the channel's logo and a variant of which is being used as that to this day), Hitler VS Chuck Norris were released. The year also saw an update to the Bunker Kombat game with new stages and Otto Günsche as a playable character. In September the collaborative Batcow channel was opened for gameplay videos.

2014 and 2015, the most unproductive of the channels history came next. Low amount of content was due to focus being on other video projects outside Hitler parodies and trying to finish up studies. With 2015 seeing only 9 parodies released, many of them quickly made short jokes so as not to let the channel die off.

2016 however saw a big boost in new content and a return to releasing Unterganger Awards result videos each month, which at this point was being made by Parker87 and just re-uploaded to spread the word. With the increase and effort put into video the channel soon started earning multiple awards after a big gap, such as Parody of the Month and Unterganger of the Month awards in March for releasing Hitler's Ghostbusters. The channel reached 10,000 subscribers on the 30th of May 2016.

Over the years he has also released multiple Green Screen packs. This move has been hailed by many as the meme's lifesaver that will extend the meme for a few more years. His green screen packs are used by tons of Untergangers, and many consider them to be a necessity in parody making.

He first made short, 20-second videos, but eventually went on making longer, story-based parodies, usually depicting a random event in the bunker. A recurring gag in TheSilverUniverse's parodies is the appearance of the Jodl head, placed in areas generally overlooked. It was common enough that a mini mockumentary was made about it, explaining the phenomena as a supernatural activity.

Another small running gag in his videos is a licence plate for cars that says FUCK-FG or Fuck Fegelein. This gag hasn't been used much but it can be seen in videos such as: Hitler goes for a drive, Michael Myers is in Hitler's Bunker - Part 4 (1/2) and in Hitler's Llama Priest - Episode 1.

TheSilverUniverse also seems to have a fondness for Cyclopses, as in the mythical one-eyed creature. One first appears in Hitler the Cyclops, which is the video where TSU's previous avatar is from. Another one appears in Cyclops Hitler plans to invade Olympus and cyclopses are referred to on the newspaper that appears in Hitler's World Domination.

Since his return, TheSilverUniverse has engaged in many parody collaborations, the most ambitious of which was for October 2012's Halloween special involving 5 Untergangers. The plan, however, fell through as many participants withdrew due to various problems. His green screen packs has helped a lot of Untergangers by opening whole new sets of possibilities in FX parody making.

In August 2016, TheSilverUniverse collaborated with Parker87 on the results video for the Hitler Tunes DPMV Contest, making the intro, level introduction, scoreboard and the placement animations and graphics.

Before retiring he created a Green screen pack, that also contains several HD Downfall scenes and did a Hitler Parodies Marathon.

He announced his return to Unterganging, just a day after one of sparx476's many permanent retirement statements.

A few weeks since his return to parody making, on the 21st of June, TheSilverUniverse became the first 1st generation parodist and second overall Unterganger to become a YouTube partner.

Around February 2013, he announced a break from parody making for a month (seen as a temporary retirement) due to unterganging-related issues. He resumed making parodies on March 2013 as promised.

Between 2014 and 2015 he was quite inactive, only releasing a few parodies during that timeframe. But 2016 saw his return as he soon became a frequent Downfall Parodies Society Chat visitor and uploading parodies to a similar pace of before the inactivity. 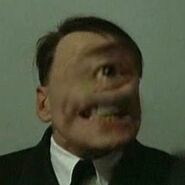 Logo variant 1, used at the end of parodies. 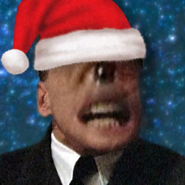 TheSilverUniverse's Xmas Icon
Add a photo to this gallery

Retrieved from "https://hitlerparody.fandom.com/wiki/TheSilverUniverse?oldid=82816"
Community content is available under CC-BY-SA unless otherwise noted.