Supersonic Crafter911 first came to the Downfall parody scene around late 2017 after watching two parodies, "Hitler Plays Minecraft" by Subaca and Hitler is informed he's installed on Windows 1945 by Hitler Rants Parodies. After watching the parodies, he found them funny and entertaining. Eventually, he would screenshot them and send them to his friend on a Facebook Messenger group chat, as a peace offering after they had gone into a fight with the latter posting some Nazi-related pictures, in which, enraged him.

At the time after watching his first parodies, he never had the resources to make his own, never knew how to edit a video, and yet, never had uploaded a video on YouTube (he already had a channel at that point, which was created back in 2015). He never heard of the movie Downfall, too. This however changed around early 2019, as Supersonic Crafter911 heard the news of Bruno Ganz's death, which by that point, he already got used to the meme.

At this point, he already coined the term Fourth Reich Parodies as the name of his parody series. After five months of training, on September 26, 2019, he posted his first parody on YouTube, Hitler is informed I have a YouTube channel (Downfall Parody), as one of his first videos on the said video-sharing site, and also his channel intro. However, it was not until 10 days later on October 6, when he officially debuted as an Unterganger after posting Hitler finds out that Fourth Reich Parodies had made its YouTube debut.

Supersonic Crafter911's channel name consists of the words Supersonic, derived from the line, "I wanna make a supersonic man out of you", which is a lyric of the song Don't Stop Me Now, performed by the British rock band, Queen, in which he is a fan of it. The Crafter is derived from the word Minecrafter, meaning a person who loves playing the game Minecraft, while 911 represents a national emergency number, mostly in the United States and also in his native country, the Philippines, in which, due to prank calls of it led to being an Internet meme.

The Fourth Reich in his parody series name represents a future German Reich, succeeding the Third Reich which lasted from 1933 to 1945. He coined the term as a joke because he looked up for memes regarding the European Union as the Fourth German Reich. Whether this is true or not, but the EU is dominated by German-speaking nations, if not Germany, which is probably the reason why it became a meme. The term parodies meanwhile means that if the Fourth Reich would exist today, it will be mocked again just like its predecessor, by making parodies just like the movie Downfall.

​​​​Before entering YouTube, Supersonic Crafter911 originally created videos, mostly about Talking Tom, Minecraft gameplays, and Downfall parodies and he would send the videos to his Facebook Messenger group chat. He would later store his videos on Google Drive for future use. During his 5-month Unterganger training, he made 40 parodies, intros, and outros included. As he already had a YouTube channel, he would then move most of his Messenger parodies and all other future parodies there, with the former being dubbed as the "Predebut Parodies".

Aside from Downfall parodies, he also posts gaming videos (in which it was the original idea of his YouTube channel, posting gameplays), showcases (either trying out a new video game or reviewing a new toy or stuff), or even vlogs (visiting a place for Christmas, etc.).

His original plan as a YouTuber was to be an anonymous character (not revealing his voice or face, although he would plan to reveal both by Christmas or April Fools or when he reached a milestone), however, this changed when he appeared at a movie vlog posted by his friend, in which he decided to reveal himself instead.

He also has a back-up channel on BitChute. He also once had a Vimeo and a Dailymotion channel, but both got deleted due to copyright infringement.

In making his own videos, he usually records them using either his smartphone or iPad, most especially screen recording apps for his showcases and gameplays. For the editing, he uses video editor apps like Kinemaster or FilmoraGo. He also makes thumbnails mostly from photo ediing app called PicSay Pro. He therefore makes him one of the Untergangers to use a mobile device for Unterganging, aside from VileHQ, however, this might possibly change as he had recently acquired a laptop of his own.

Supersonic Crafter911 is mostly a traditionalist, usually uploading parodies regarding Hitler and his generals discussing a certain topic, like the latest news happening either in his home country (the Philippines) or any parts of the world. He sometimes creates modified traditional parodies like comedic parodies (like Hitler looks at Fegelein's sexy body), news-oriented parodies, usually under Reich Patrol, a parody of the Filipino evening newscast TV Patrol, like Hitler interviewing someone, for example, Phil Swift, or a mock news report like Weidling delivering a message to the public, etc.

His news-oriented parodies are usually premiered to a certain date and time, as opposed to other parodies, which he uploaded on the same day he created it. He also makes FX parodies like Hitler is informed he's in Manila for Independence Day, most notably chroma keying.

Sonic also uploads story-based parodies, ranging from a one-scenario video to a feature-length parody, which is more cinematic and longer than most of his parodies, usually running at more than 10 minutes. His first feature-film parody can be watched here, which is Hitler becoming a teacher in his own school. Another story-based parody is Hitler leads a raid on Fegelein's village, which shows Hitler leading a raid on Fegelein's village, and engaging his nemesis onto a tank battle. The said parody ​​is an entry to F-A Alexander's Panzerkrieg Parody Contest.

He also makes audio-based parodies, probably to avoid copyright claims or being blocked by Constantin Film. It can be found here.

Influenced by his love of rock, classical, and even K-Pop music, Sonic also makes Musical parodies or DPMVs, usually a parody too of a song. His notable DPMV is Hey Fegelein!, a parody of Hej Monika of the Swedish pop band Nic & the Family, performed by a parody pop group led by Hitler, Reich & The Dolfy, now known as Reich 101, in which it won the Best Parody By A Newcomer Award of the December 2019 Downfall Community Awards.

Contests Supersonic Crafter911 entered and won as an Unterganger. 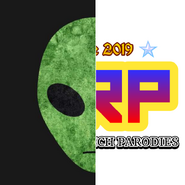 Fourth Reich Parodies' old intro, inspired by Marvel Studios. The European Union Flag is shown along with the German Flag to emphasize the meme of the EU being the Fourth Reich. The intro, along with the outro, was been used since Sonic's pre-debut days and was been discontinued on July 4, 2020.

Ditto, but with the EU and German Flags being replaced by two Philippine Flags to commemorate the Philippine Independence Day.

A still of Hitler interviewing Phil Swift. Pretty sure he got a lot of damage from him LEL XD.

Kang Göring tries to dance during the intermission number of REICHS*ONE's Der UnterDiary comeback showcase. Pretty sure Speer will be enraged as he might end up destroying the whole stage set or even the whole arena due to his fatness.
Add a photo to this gallery

Retrieved from "https://hitlerparody.fandom.com/wiki/Supersonic_Crafter911?oldid=86381"
Community content is available under CC-BY-SA unless otherwise noted.