Start a Wiki
“Marschall Schukow?!”
―Misch after being asked to telegraph Zhukov.

Rochus Misch (29 July 1917 – 5 September 2013) was an SS sergeant who was Hitler's personal bodyguard and responsible for the Führerbunker's communications system. Misch died on 5 September 2013 as the last witness of the Bunker events shown in Downfall.

In Downfall, Hans Fritzsche - exasperated by the hopelessness of the situation and by Joseph Goebbels' refusal to allow a surrender - enters Misch's office and tells him to send a telegram to Soviet Marshal Georgy Zhukov. Misch asks "to Marshal Zhukov?" and then Wilhelm Burgdorf comes in and tries to shoot Fritzsche.

Misch later appears when Krebs and Burgdorf commit suicide. He was sitting at his desk when he heard two shots coming from a nearby room. He went over there and found Krebs' and Burgdorf's bodies. He took two napkins and laid them over their heads, covering the bullet holes in their heads.

He is last seen in the "Goebbels and Magda suicide" scene contemplating suicide, where before Joseph Goebbels and his wife Magda leave the bunker, Goebbels tells him "I don't need you anymore. The game's over," then leaves the bunker to commit suicide.

Like in Downfall, Misch's role is mainly that of a radio operator. His most common appearances are in parodies using the Goebbels Rants Scene. It's a running joke that Hans Fritzsche constantly tries to get him to send illegal radio messages to people, only to be stopped by Wilhelm Burgdorf, such as in the scene pictured above, taken from "Goebbels doesn't like to be called Skeletor" by Hitler Rants Parodies, in which Fritzsche asks Misch to tell everyone about Goebbels horrible nickname.

Other popular names Misch likes to use in this scene may include, among others: 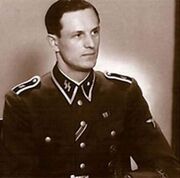 An old Misch with a photo of his younger self.

Situation Misch is in after he (regretfully) drinks Burgdorf's Vodka.
Add a photo to this gallery

Retrieved from "https://hitlerparody.fandom.com/wiki/Rochus_Misch?oldid=84796"
Community content is available under CC-BY-SA unless otherwise noted.