Various; gets more pronounced towards the end of the film

Günsche was born in Jena in Thuringia. After leaving secondary school at 16 he volunteered for the Leibstandarte Adolf Hitler and joined the Nazi Party. He first met Adolf Hitler in 1936. In 1944 he fought on the eastern front and then in France. He was present at the 20 July 1944 attempt to kill Hitler at the Wolf's Lair in Rastenburg.

As the end of the Third Reich became imminent, Günsche was tasked by Hitler with ensuring the cremation of his body after his death and Günsche stood guard outside the room where Hitler and Eva Braun committed suicide.

Having ensured that the bodies were burnt using fuel supplied by Hitler's chauffeur Erich Kempka, Günsche left the Führerbunker a few hours later, on 30 April 1945. He surrendered to Soviet troops encircling the city soon after and was flown to Moscow for interrogation by the NKVD.

He was imprisoned in Moscow and Bautzen in East Germany and released in 1956. During his imprisonment, Günsche was a primary contributor to Operation Myth, the biography of Hitler that was prepared for Joseph Stalin. The dossier was edited by Soviet NKVD (later known as the MVD, the forerunner of the KGB) officers. The report was received by Stalin on Dec. 30, 1949. The report was published in book form in 2005 under the title: The Hitler Book: The Secret Dossier Prepared for Stalin from the Interrogations of Hitler's Personal Aides.

After the war, he never told much about what he did.

Günsche died of heart failure at his home in Lohmar, North Rhine-Westphalia in 2003. He had three children, including a son named Kai.

Günsche was the trustworthy aide of Hitler. As Führer's personal adjutant, he was present in the bunker for the duration of Hitler's stay there, although he doesn't seem to be as close to Hitler's side as Goebbels and Bormann did.

He was first seen in the Hitler Plans Scene, where he stayed outside the situation room by the door and opened the door for Mohnke. Some time later, he accompanied Hitler who went out to the chancellery garden to award some Hitler Youths.

A few days later, before the Original Bunker Scene, Günsche told Traudl and Gerda, who approached him in the anteroom, that the artillery are not German. Gerda told him that Steiner's attack should be underway by then. As Fegelein approached, he left the ladies and went into the situation room. As Hitler rant to the generals, he was by Gerda and Traudl, listening from the anteroom with most others. He remained in the anteroom through the Fegelein's debate with the generals.

Günsche was later seen within a little audience of Goebbels's children singing, and then with Linge burning Hitler's documents.

His appearance only became prominent when he went to inform Hitler that Fegelein cannot be found in the bunker. He would once again inform Hitler of Keitel's reply to a telegram. Convinced that he is losing the war, Hitler instructs Günsche to take his body to be cremated once he committed suicide. Günsche agreed to carry out the order, even if it's a terrible one. He then went to call Kempka in the garage to procure 200 litres of gasoline. Günsche later greeted Werner Haase, Schenck and Erna Flegel who went down into the bunker to meet Hitler. He then returns to join the drinking table. As Hitler went into his room for the last time, Günsche stands by the door and guards it, later to yield to Magda's plea to see the Führer one last time.

After Hitler shot himself, Günsche went to inspect the dead bodies of Hitler and Eva and inform the others waiting in the next room. Günsche later carried Eva's body (Linge and Bormann carried Hitler's) to the gardens to be doused with gasoline, then burned.

He was only to be seen again during the bunker occupant's breakout from Berlin.

Günsche is often depicted as the bumbling and tall (compared to Hitler's short, stout size) assistant to Hitler and is responsible for informing him about mostly useless information or the latest set of antics committed by Fegelein on the Führer. Due to the latter, he is highly distrusted by Fegelein and Himmler. This does not mean that Günsche's loyalty to Hitler is steadfast, however. Many parodies have shown Günsche on both sides of the war of antics, and because of this, it is unknown as to where his loyalties truly lie. In some situations, however, Günsche is needed as one of Hitler's most trusted allies.

In the search for Fegelein, he is the most common person to ask, and Hitler asks him to find Fegelein on every occasion, with some exceptions, like the "Hitler is informed by _____ that _____ did not find Fegelein" series by Benad361. And almost every time, Günsche informs him that Fegelein cannot be found. Even when he informs him Fegelein is found, it is usually a false alarm, but in both cases, this causes Hitler to hit the desk angrily shouting Fegelein's name.

Some parodies depicted Günsche as gay, as he often asked Hitler to sleep with him or to marry him. In the case of Gachaganger's Gunsche Got a Date and Hitler's Bizarre Gacha Adventure parodies, to Saika Totsuka, an anime character who is an effeminate boy. In the former, he goes on a date with Saika but ends with them being best friends and in the latter, he asks Saika to make love with him, with Saika reminding him that he's a boy but was dismissed and ends up being kissed and pushed to the floor but it all turns out to be a dream. I'm may be implied that Günsche still has a secret crush with Saika. However, some as well have shown that he has fallen in love with Gerda or Eva; the latter much less frequently, but shown in Bossimias' Günsche is sleeping, when he says sleepily, "Oh Eva, your skin is so soft", implying he likes her. As a result, it's possible that he's bisexual.

Günsche worked as a pizza delivery guy before he was hired as an informer by Hitler[1]. He is constantly shown to be dumb (or dim-witted), because he asks random questions towards Hitler, like "Who is Fegelein?", or making crazy suggestions, like when Hitler runs out of toilet paper, he suggests using a cloth or a paper, although Hitler usually thinks that Günsche is just trying to piss him off. Günsche is shown to be oblivious in several parodies, like his hair was on fire and he didn't notice, and when Hitler disposes of a cigarette and lights Günsche on fire (and the latter doesn't even notice). He also is shown to sometimes object Hitler's opinion at times, like when Hitler interrupts two of President Obama's speeches, he claimed it was a waste of time. Günsche is also informing him of many mundane things, like saying Hitler is a Jew, Hitler's head is stuck, the bunker is on fire, etc. However, Günsche, as shown in some parodies, is smarter, including when he tells Hitler that cigarettes are bad for his health, and the latter didn't realize it until it was too late.

wilmolfc also pointed out that Otto is not just the informer, he is also Hitler's personal bouncer. Also, he is seen letting a general into the planning/ranting room later in the planning scene. He is also the person who guards Hitler's room when he 'Goes to bed'.

Günsche goes to find Hitler, but revealed in the office that of the real Hitler, the real one tells him to not distract him by giving him any rude comments.

On December 30, 2011, Günsche ended up quitting his job as informer and became a telemarketer for Berlin Novelties, Incorporated.[2] Hitler's attempts to replace him failed, as everyone else in the bunker was busy, even worse than Günsche, or named Fegelein. Luckily, Günsche ended up returning within a few days.

Besides informing Hitler of stuff, Günsche has also shown some talent playing musical instruments such as violins[3] and flutes[4]. He may actually possess Pied Piper-like abilities with his flutes, especially when the only song he has learned to play on it is the Trololo.

Günsche has been revealed to live in poverty with his wife, who looks much like Hitler, and his son Günsche Jr. in a stilt house on a swamp.[5] They were so poverty-stricken that Günsche Jr. is killed for dinner, and Günsche Sr. told his wife that she can always give birth to a new Günsche Jr. next year. Overhearing the conversation, Hitler decided to give his trusted informer a generous amount of cash as a Christmas present.

He also got lost in the bunker once trying to find Hitler.

Günsche gets his chest massaged tenderly.

Gacha Life Günsche. "I must inform you that I'm in Gacha Life. And I dyed my hair blond."
Add a photo to this gallery 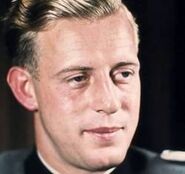 A picture of the real Günsche, who either is planning to inform Hitler of the stupidest thing or has finally allied himself with Fegelein.

Günsche behind a conversing Hitler. Taking into account the perspective he must be very, very tall.

Günsche behind Göring, Hitler and Speer.

Günsche, walking behind Hitler, Keitel, Goering and Bormann. Note that he is almost the same height as them even though he is a few metres behind them. 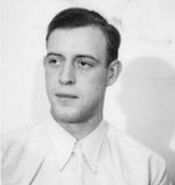 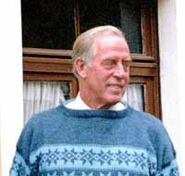 IRL Günsche in his later years.
Add a photo to this gallery

Retrieved from "https://hitlerparody.fandom.com/wiki/Otto_G%C3%BCnsche?oldid=85045"
Community content is available under CC-BY-SA unless otherwise noted.