On May 2, 2011, bin Laden was shot and killed inside a private residential compound in Abbottabad, Pakistan, by U.S. Navy SEAL Team 6 and CIA operatives in a covert operation ordered by United States President Barack Obama.

Hitler had an obsession in capturing Bin Laden soon as possible before United States of America or anybody else did, and he sent all of his men to find him. Nobody was able to find him and they begged Hitler to stop, but he refused. In the end however, he realized that Bin Laden could not be found.

2 years later, despite accepting that Bin Laden could not be found he still hoped that they would find Bin Laden first, then he got the news that Osama was found and killed by USA which outraged Hitler. It also angered him that Bin Laden was killed in a location which Himmler searched early and told him that he wasn't there. He ordered the others to leave him alone and to bring Fegelein to him since he may be involved on their search for Bin Laden. 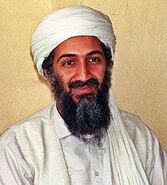 Osama Bin Laden watching TV in his hideout.
Add a photo to this gallery
This article is a stub, seriously. Go and press the "Edit" button so you can help expanding it. If you don't do it you will become a victim of a Fegel-antic!
Retrieved from "https://hitlerparody.fandom.com/wiki/Osama_bin_Laden?oldid=77390"
Community content is available under CC-BY-SA unless otherwise noted.