Nikolai Ivanovich Yezhov (May 1st 1895 - February 4th 1940) was the head of the Soviet secret police, the "People's Commissariat for Internal Affairs" (NKVD) (September 26th 1936 - November 25th 1938) and a senior figure in the great purge; in fact, the wave of mass arrests, executions, deportations etc became known as the "Yezhovschina" (the Yezhov era).

In the Stalin parodies of Benad361, Yezhov is presented as a diminutive, loyal, sadistic and zealous official, to the extent that "Comrade Yezhov's castration skills" and "Yezhov's Meatgrinder" are notorious amongst Stalin's ministers (Stalin even threatened Tukhachevsky with them at one point), especially since the terrible rumours of what befell his predecessor, Yagoda, after he was caught making a Downfall parody in Leningrad (several references are made to this incident, (e.g. in "Stalin's Grawitz" Budyonny Messes up a Parody Filming" in which footage of Stalin confronting Yagoda with the accusation is shown; the horror on Yagoda's face upon being told he is meeting Yezhov is clear).

He is known as "Stalin's Gunsche" due to his ability to inform, the only difference between the two is in size, and, possibly, Yezhov is considerably smarter than him. Yezhov, has on one occasion, upon being called a "Diminutive Twat" by Hitler, even been so bold as to punch the Fuhrer full on in the face, with suprising force (see Benad361's parody "Hitler Encounters Nikolai Yezhov"). Yezhov has also punched Gunsche in the face before, in the parody "Gunsche Finds out the Bunker is Infested with Russians" after Gunsche says "Yezhov's too short, and sucks as a response to me." 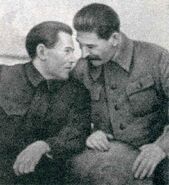 I can see you...
Add a photo to this gallery

Retrieved from "https://hitlerparody.fandom.com/wiki/Nikolai_Yezhov?oldid=12824"
Community content is available under CC-BY-SA unless otherwise noted.