Muammar Muhammad al-Gaddafi (7th June 1942 - 20th October 2011), commonly referred to as Colonel Gaddafi, has been the leader of Libya since a military coup on 1 September 1969 where he overthrew King Idris of Libya and established the Libyan Arab Republic. His 42 years in power made him one of the longest-serving rulers in history.

Throughout the 1970s and 1980s, Gaddafi's government was considered a pariah state by the West, denounced for oppressing internal dissidence, acts of state-sponsored terrorism, assassinations of expatriate opposition leaders, and crass nepotism which amassed a multi-billion dollar fortune for himself and his family. Gaddafi renamed the Libyan Arab Republic to Jamahiriya in 1977, based on his socialist and nationalist political philosophy published in Green Book. In 1979, he relinquished the title of prime minister, and was thereafter called "The Brother Leader" or "The Guide" in Libya's Socialist Revolution, which is very much like Hitler's title as the Führer (the word "führer" in turn literally means "guide" or "leader" in German, although this no longer used in most cases due to negative connotations with the German dictator). Gaddafi was a firm supporter of OAPEC and led a Pan-African campaign for a United States of Africa. After the 1986 Bombing of Libya and the 1993 imposition of United Nations sanctions, Gaddafi established closer economic and security relations with the west, cooperated with investigations into previous Libyan acts of state-sponsored terrorism and paid compensation, and ended his nuclear weapons program, resulting in the lifting of UN sanctions in 2003.

In early February 2011, major political protests, inspired by recent pro-democracy events in Tunisia, Egypt and other parts of the Arab world, broke out in Libya against Gaddafi's government and quickly turned into a general uprising, and finally, a civil war. Gaddafi vowed to "die a martyr" if necessary in his fight against the rebels and external forces.

On Thursday 20 October, it was announced that Gaddafi was killed by his own people, after French airstrikes destroyed his convoy outside Sirte, and he was forced to take shelter in a drain. He was then found by the revolutionaries, and (controversially) killed. Some have pointed out the irony of him branding his opponents "rats", yet he himself were eventually found hiding in a drain.

He has become the subject of parodies. He was either Hitler's enemy, or even a victim to Fegelein's antics. In the process, he has his own meme, Gaddafi rants parodies. In Benad361's parodies he is a frequently featuring character, making arbitrary appearances (through use of his voice or his face inserted with Vegas) to interact with other characters, rant hilariously (often with extensive bufflaxing) and add to the hilarity of the situation.

His son Khamis, his daughter Aisha, and his son Saif have all appeared in Benad361 parodies as moderately significant characters (e.g. his recent: "Hitler versus the Gaddafi's: Part One"). His other son Mu'tasim-Billah and his "answer to Goebbels" Moussa Ibrahim will also feature in future Benad361 parodies.

In most parodies he is depicted as a ranting maniac much like Hitler himself. However some untergangers (notably mfaizsyahmi and Gagislobista) are either sympathetic to (the former) or openly supportive of Gaddafi (the latter) and have made parodies depicting him in a good light.

In non-Downfall Parodies, he is popularized by the song Zenga Zenga, remixed by using his speech and the song "Hey Baby" by Pitbull ft. T-Pain. It was remixed by Israeli Noy Alooshe. It was slightly referred to in "Hitler, Stalin, and Others are Trapped in a Wooden Box".

In the most recent Benad361 parody series, Hitler's murder of Gaddafi sparks a war with Gaddafi-held parts of Libya, and Gaddafi's family, which results in (shown in Hitler versus the Gaddafi's: Part Two) Gaddafi defeating the reich, occupying the bunker, and replacing some of the bunker crew with his own family members, before being defeated and killed by Gunsche and others.

He is shown (in a Benad361 parody) not to have been killed in the parody universe, but trapped in the closet belonging to Soviet general Vasily Chuikov. He is also depicted as having met his end as a result of being crushed in an Apatosaurus stampede on Skull Island.

He is the only other character included in parodies (other than Hitler) to possess what seems to be both a pet and a weapon, the Gaddafi-cobra, which has never been visually seen, but heard hissing and attacking Jodl in the parody "Hitler, Stalin and Others are Trapped in a Wooden Box" by Benad361. It is possible this is a Gaddafi-family pet. His other weapon is his "Fist of Mass Destruction" created by Gagislobista. 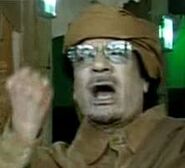 Fear the power of my Fist of Mass Destruction!

I have developed a new optics system that will surely bring down the NATO planes! 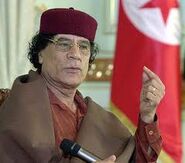 I shall pinch the Western infidels to death!

Why does the French President look like a certain map pointer?!

Gaddafi introduces the Papers of Doom MKII
Add a photo to this gallery
Retrieved from "https://hitlerparody.fandom.com/wiki/Muammar_al-Gaddafi?oldid=73950"
Community content is available under CC-BY-SA unless otherwise noted.