Marshal of the Soviet Union

People's Commissar of Antics (in the parodies)

“Bullshitty/Bullshit”
―Tukhachevsky's buffalaxed line he uses to describe most bad situations and/or things or people he has a disdain for, in the parodies

Marshal Mikhail Nikolayevich Tukhachevsky (Russian: Михаи́л Никола́евич Тухаче́вский; February 16 1893 - June 12 1937) was a senior Red Army commander (later Marshal in 1935). He is well known for his research and developments into mechanised warfare, especially his "deep battle" theory. He was one of the most prominent victims of Stalin's Purges of the Red Army.

In the Stalin Parodies of Benad361, Tukhachevsky assumes his main role as Stalin's antic master in the parody Stalin has no answer to Fegelein, where he's involved in a scheme to buy Fegelein from Hitler. When he failed, he was tried and convicted of being an epic failure and treason, and he was subsequently executed. However, as with Fegelein, he was subsequently reincarnated somehow.

Later, he is dubbed as "Stalin's Fegelein" and becomes an antic master (after he passed his antic exams with a "B in anticology", which was later re-marked and discovered to be an A. After committing many successful antics and proving his worth, he was also officially appointed to lead and coordinate Soviet-sanctioned antics against internal and external enemies as People's Commissar for Antics.

Although being a serious and unfriendly character, his antic powers drastically rose, and resulted in his being on a similar level of antic skill with Fegelein himself. On Stalin's initiative (he was threatened with "Comrade Yezhov's castration skills" if he refused), he developed his own superweapon, "Tukhachevsky's Fork of Pwnage", a weapon of similar power to "Hitler's Pencil of Doom and Mass Destruction" and "Fegelein's Fist of Mass Destruction".

He pulled his first antic in his new role when he switched the Downfall scripts (containing lines from the best Hitler Parodies, minus Hitler gets banned from XBox live ) and replacing them with Pro-Soviet propaganda where Tukhachevsky is praised along with Stalin. As a result, Hitler sent a letter to Tukhachevsky, where he declares an antic war. Tukhachevsky later performed another antic in collaboration with Lt. Werner, in which the two of them managed to get Justin Bieber's music to play constantly throughout the Führerbunker. He recently performed his most bizarre antic when he managed to convince aliens from "Planet Fegelein" to land in front of the bunker.

Fegelein got the credit for this, and so Tukhachevsky declared Fegelein an enemy, and attempted several lethal antics on , which initially failed. As shown in Benad361's latest parody: "Tukhachevsky versus Fegelein: Round Two"), Fegelein counterattacked (by sending Stalin copies of Tukhachevsky's emails in which he had insulted him) and as a result, Tukhachevsky was punished by painful use of "Comrade Yezhov's castration skills". However, later on, Tukhachevsky managed to frame Fegelein as the culprit of an antic he did not commit, getting him temporarily killed, before the power of antics resurrected him.

Relationships with other Parody Universe characters

In "Hitler, Stalin, and Others are Trapped in a Wooden Box", he meets his Hitler Parody Counterpart for the first time. Fegelein seems impressed by his antic in "Tukhachevsky's First Antic", which somehow persuades Himmler to take him as his apprentice. He asks Stalin if he's allowed, but the answer to that question is unknown at the end of the parody. In the upcoming Benad361 parodies, Tukhachevsky is a good friend of Himmler and may have received antic tuition from him, meaning that Stalin probably allowed him to do so. However, as stated above, Fegelein and Tukhachevsky later became deadly enemies.

He is shown (despite the antic war with Germany and the fact that he is an enemy of Fegelein and Hitler) to be an ally (and seemingly a friend) of Heinrich Himmler, the most well-known Grand Master of the Antic Order. He took Tukhachevsky as his antic apprentice, and gave him antic tuition, which is maybe what explains Tukhachevsky's considerable increase in his antic-based skills and talents.

In Godfrey Raphael's parodies, he formed a band with the other antic masters named The Antic Masters, spreading good music throughout Soviet Russia and the world. In a similar parody also by Godfrey, "Hitler and the Hungary Red Sludge Spill", he is shown to have been one of the masterminds of the plot to burst the Ajka alumina plant reservoir, alongside Stalin and Chiang Kai Shek, although it was revealed that the disaster was actually all Chiang's fault, as he had not yet mastered his antic powers.

He worked with Himmler and Antic Master Lt. Werner for a hilarious anticagainst Hitler. Himmler manipulated the two into working for him, and neither realised that the other was working with Himmler too. This was shown in the collaboration parody "The Antic War: Himmler's Intrigue versus the Fuhrer" made in an unterganger collaboration between Benad361 and U-Boat Parodies founder HitchcockJohn.

Tukhachevsky is also shown to commit antics against Stalin - in "Tukhachevsky's Aeronautical Antic" by Benad361, he hijacks Stalin's helicopter (or the "Stalincopter") while he, Yezhov, Stalin and Budyonny are riding on it. He performs many fancy and reckless manuvers in the air (to the immense irritation of the other passengers) and eventually crashes the Stalincopter (if this was deliberate or not is unknown). Stalin was angry, and Tukhachevsky had to pay for the helicopter to be mended, and for Stalin's spare tunic to be cleaned (after Budyonny was sick on it). This was a clear sign of the initiation of a new era of his antics - now, even Stalin was targeted, in spite of the "Declaration of Soviet Antics" banning such things. Once, Tukhachevsky even blew Stalin, many generals, and much of the Kremlin up with a Mikhail-Mine, causing Stalin to rant at him in anger. Once upon a time, he trapped Stalin in an elevator.

In turn, Stalin also seems to have a problem with Tukhachevsky's "attitude", which he has brought up on at least one occasion.

Tukhachevsky has a clear disdain/dislike of Hitler, as do most other characters in the Parody Universe. However, he is perfectly prepared to work with/manipulate him, in order to fulfil his ambitions. He trained Hitler in secret at the Tukhachevsky Antic Academy so he would become a ruthless swordsman, in the hope that he he could be used as an unwitting proxy to defeat their shared arch-nemesis: Fegelein (and score agaist Himmler into the bargin). The plan failed and Tukhachevsky's friend Himmler saw through his plan and was angered, feeling betrayed. He condoned Fegelein's antics against Tukhy as a result, but if he will take any personal action as a result of this remains to be seen. However, none has materialized so far.

Despite the ongoing wars, he becomes worried at the prospects for war with Antonescu Parodies and organised a conference in an attempt to unify the various parody factions should the Parody Universe need to defend itself from new threats. However he deliberately chose not to invite Hermann Fegelein, a decision he may have regretted. The conference took place aboard his personal Antic Jet.Fegelein emerges from hiding in the cargo hold (where he had stowed away) and tries to kill Tukhachevsky with his antic gun in revenge. A scuffle with Hitler prevents the inital attempt being a success, but all the rest of the crew (save Fegelein and Tukhachevsky) are sucked out of a window (which is smashed in the scuffle between Hitler and Fegelein), ruining his plans for a parody alliance. The two are then killed in the ensuing fight/crash of his jet.

However, in the alternative ending he was depicted as triumphing against Fegelein in a high-tech battle between their two cars (an Aston Martin Vanquish: Antic Class for Tukhachevsky and a Jaguar XKF (Fegel) for Fegelein). Either way, both are later resurrected, probably due to the power of antics.

In Benad361's Rosen Wars series, he is presented as a key leader in the Free Parody Universe Alliance (FPUA), spearheading the fight against Emperor Rosen's new order, alongside Stalin, Fegelein (who he seems to have reconciled with), and others. Later, upon the death of Stalin, he becomes commander of the FPUA himself, as Stalin's will instructed. Despite his extensive skills, he cannot stop the Rosen juggernaut rolling across the Parody Universe, until only planet Fegelein still stands free.

Despite normally being stoic, resourceful, and calculating, Tukhachevsky very occasionally seems to be at a loss, and even afraid, just like other antic masters such as Fegelein. This can be seen in Benad361's parody: Hitler Reminisces: Adventures on Skull Islandas he and various parody characters flee the stampeding Apatosaurus. Tukhachevsky takes cover from the stampede and discovers a Venatosaur above him, roaring at him. He forgets he is carrying an antic-modified Thompson submachine gun, and panics; sprinting back into the stampede and right to the front, rather than face the dinosaur.

Later, a second dinosaur at the head of the herd gives chase, and he continues to flee rather than face it. When it looks to be about to attack him, his rational and dynamic nature fails him, and he madly and fearfully sprays the dinosaur with bullets, killing it and unintentionally killing the herd's leading Apatosaur too; with dire consequences.

In DeltaForce62's universe, he was known for reviewing Takara Sato (from Red Alert 3) and boldly attempting to steal a valued Fegel-lona picture from Stalin, despite Stalin's bold attempts at warning him not to. He was known as the "Russian Chuck Norris", and even declared himself as such to Stalin.

Comparisons with Other Antic Masters

I guess he isn't that as cold as he seems.

Tukhachevsky without his uniform. 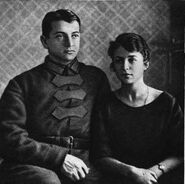 With his wife Nina.

Tukhachevsky on a stamp.

Tukhachevsky looking rather fine in this fan art by Das reich...

Tukhachevsky, after Fegelein stole his razor...

Tukhy in a Tuk-Tuk. Your argument is invalid.

Tuk in HOI IV
Add a photo to this gallery

Retrieved from "https://hitlerparody.fandom.com/wiki/Mikhail_Tukhachevsky?oldid=83369"
Community content is available under CC-BY-SA unless otherwise noted.