Joseph Goebbels, Hermann Göring, Heinrich Himmler, Albert Speer (all IRL)
“I think I'm in love with you, Speer.”
―Bormann to Speer on the picture beside
“You're drunk, you fat Göring lookalike.”
―Speer's ice-cold reply
“The Führer didn't really mean he'd shoot himself...”
―Bormann just after the Original Bunker Scene

Martin Ludwig Bormann (17 June 1900 – 2 May 1945) was a German politician, who became the chief of the Nazi Party's Chancellery at May 1941. He is portrayed in Downfall by actor Thomas Thieme.

Born in Wegeleben (now in Saxony-Anhalt) in the Kingdom of Prussia in the German Empire, Bormann was born to a Lutheran family, the son of Theodor Bormann (1862–1903), a post office employee, and his second wife, Antonie Bernhardine Mennong.

In 1927, Bormann joined the NSDAP. His NSDAP number was 60,508 and his (honorary) SS membership number was originally 278,267. By special order of Himmler in 1938, Bormann was granted SS number 555 to reflect his "Alter Kämpfer" (Old Fighter) status. He became the party's regional press officer and business manager in 1928. On 10 October 1933, Bormann became a Reich Leader (Reichsleiter) of the NSDAP, and in November, a member of the Reichstag. He gained Hitler's trust and derived immense power within the Third Reich by controlling access to the Führer and by regulating the orbits of those closest to him.

Bormann was one of the residents of the Führerbunker in the last days of Nazi Germany. After Hitler's suicide, he left the Bunker with a group of soldiers and Dr. Stumpfegger. How he died is a mystery - either he killed himself with a cyanide pill, or a mortar shell hit near him.

His role in Downfall is minor, seen to only stand around Hitler, such as in the Original Bunker Scene where he stands beside Goebbels. He also remarked, immediately after Hitler's massive tantrum about Felix Steiner's failure to carry out his assault, that "the Führer didn't really mean he'd shoot himself", the first to break the silence.

He was also the one among Hitler's cronies to first receive Hermann Göring's telegram about his desire to assume control of Germany should communications from the bunker be severed, and relays it to Hitler, who appropriately reacts furiously ordering Göring be deprived of power and arrested.

He later talks to Speer, as the latter meet Hitler one last time to say farewell, to convince Hitler to leave but is ignored. After Hitler and Eva committed suicide, he stood in front of the door, and later carries Hitler's body with Heinz Linge to the surface.

In the Parody Universe Bormann is known for being one of the bunker's fatsos, right after Hermann Göring. He is also quite foul-mouthed to Traudl Junge, making sexually-harassing remarks as the latter hands him reports.

Bormann covering his nose from the stench of Göring's farting.

Dear Friend Hitler Bormann. Notice how ol' Fritz is keeping an eye on him.

Inglourious Basterds Bormann, pointed out by an arrow.

Photo of real Bormann. Not as fat as the Downfall counterpart. 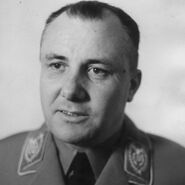 Bormann asks for Vodka.
Add a photo to this gallery

Retrieved from "https://hitlerparody.fandom.com/wiki/Martin_Bormann?oldid=79611"
Community content is available under CC-BY-SA unless otherwise noted.