Map pointing is the act of placing one's fingers, or other suitable objects, onto a map to aid in identifying items represented on the map. In Downfall, Krebs, Hitler, and Mohnke can be seen pointing at maps, though some characters have been speculated to point maps as well. Nevertheless, map pointing is the main job of Krebs in the parodies, as Krebs has an obsession with maps.

Most map pointers prefer to use their own fingers, despite the danger that might be associated with it. The number of fingers and gestures used depends on what is being pointed at - most of the time only one finger is used. Mohnke has been known for using two fingers during one of his map pointing session. Hitler once used his whole hand in a sweeping gesture across the map surface.

Other times, map pointers use tools to aid pointing targets more precisely or targets that are out of reach. Heinrich Lehmann-Willenbrock is shown to use a pencil. Erwin Rommel used a ruler, which he remarked as being "more sanitary" than fingers.[1] He even used little panzer figures etc. a la Risk; in fact in the film Rommel Krebs and several other characters are shown to use these pieces to represent military forces.

In the Stalin Parodies, Kliment Vorshilov is the person who is mainly responsible for the map pointing. In the U-Boat Parodies, there is no official map-pointer yet, though Captain Heinrich Lehmann-Willenbrock has shown a capability of doing so (although he uses a pencil, rather than his finger). Chief Engineer Fritz Grade admits to being bad at map pointing, apparently once having nearly led U-96 into an alternate dimension.

The art of map pointing is taught at a few schools around the world. Krebs is the headmaster of the School For Map Pointing in Berlin, with Hitler as the teacher.[2] Mastering map pointing is important, as some versions of the Pencil of Doom and Mass Destruction requires a map to act as a targeting device, and the Pencil must be precisely thrown to hit the target represented on the map.

Krebs pointing at the tactical map of Berlin.

Hitler pointing at a similar map; here the line of combat is farther off.

Is Weidling pointing a map?

Mohnke points at a map where Tiergarten is, using 2 fingers.

Bruno Ganz pointing at a map.
Add a photo to this gallery

Dear Friend Hitler Map. But not of Delhi.

Rommel's giant map, one of his trump cards against the Downfall map pointing establishment.

Kit Kittredge and a Cincinnati Register staff member named Billy Peabody in front of a map. Let's see if this would teleport Kit to some place else.

Billy points at a map of Ohio. Unfortunately for him, there's no Frohnau or Pankow in Ohio.

Rainer Klausmann points at the map.

A general is using a ruler for map pointing.

"3D" Map pointing when not in war scenario.
Add a photo to this gallery 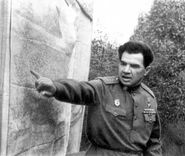 Real life Hitler pointing at a map while Jodl watches.

Before Krebs, there was Goering!

Present-day schematic Berlin map.
Add a photo to this gallery

Retrieved from "https://hitlerparody.fandom.com/wiki/Map_pointing?oldid=74349"
Community content is available under CC-BY-SA unless otherwise noted.