“Come kids, don't you want to try some booze from Burgdorf's secret stash?”
―Stumpfegger to the Goebbels kids

Stumpfegger was born in Munich in Bavaria. He initially worked as an assistant doctor under Professor Karl Gebhardt in the Sanatorium Hohenlychen, which specialised in sports accidents. As a result of this experience, he was part of the medical team, along with Gebhardt, at the 1936 Summer Olympics in Berlin and the Winter Olympics of the same year in Garmisch-Partenkirchen. In 1945, Stumpfegger started working directly for Hitler in the Führerbunker in Berlin under the direction of Dr. Theodor Morell in its last days. He supplied Adolf Hitler with the cyanide pill with which Blondi was poisoned, and prepared the lethal toxin which Magda Goebbels administered to her own six childern. He left the Bunker with Martin Bormann and Artur Axmann. He killed himself with a cyanide capulse. Both his and Bormann's remains (Bormann's cause of death is debatable, either he killed himself or he got shot) were uncovered in 1972, and identified by dental records. Any lingering doubt was removed when Bormann's identity was confirmed by extracting DNA in 1999. Fragments of glass found in the Stumpfegger's jawbones led to the conclusion that he committed suicide via a cyanide capsule.

Stumpfegger — portrayed by actor Thorsten Krohn — has a minor role in the movie. He is first seen when Greim is brought in the Bunker (Extended Edition) and then operating him. He also appears at the end of the Goebbels Rants Scene mixing the sedative which he and Magda Goebbels later used to sedate the kids.

When the Antic Order sent the eight Slender pages to the bunker to summon the Slender Man, the papers originally went to Stumpfegger to see if he could identify what exactly they were. However, he failed to properly identify them.

He is considered one of the ugliest characters in Downfall, though he fell short of being on par with Skeletor. 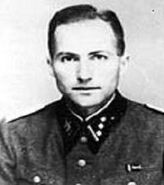 Real life Stumpfegger. Not as ugly as his Downfall counterpart.
Add a photo to this gallery

Retrieved from "https://hitlerparody.fandom.com/wiki/Ludwig_Stumpfegger?oldid=69603"
Community content is available under CC-BY-SA unless otherwise noted.