Margaret Mildred "Kit" Kittredge (b. May 19th, 1923) is an American amateur journalist and author, and the protagonist of the Kit Kittredge: An American Girl book series.

Kit was named after her mother and an aunt on her father's side, most likely Aunt Millie. She was known to be on the tomboyish side of things, unlike her friend Ruthie Smithens. She enjoys baseball, and her favorite player is Ernie Lombardi, the catcher for the Cincinnati Reds. She sees herself as a journalist and a factual writer, as she was often writing along with her friends for a small newsletter that they made up.

Kit hates change, and doesn't feel like wanting to be spoon-fed by charities, instead preferring to learn how to catch the big fish herself, which spurs her fascination with the spunky, independent pilot Amelia Earhart. She can be incessantly proud at times, but eventually she learns to swallow it, and tackle her problems with thrift and cleverness. The books depict her as being stubborn and somewhat fussy - she finds chores around the house to be rather boring and tedious, but eventually regretted it after realising her family's misfortunes. She loves country life, and the great outdoors.

Kit first appeared in Hitler Encounters a Goebbels Impersonator, where a friend of hers tried to make a Goebbels impression in front of her. She made her first bunker appearance in Gunsche encounters a visitor at the Bunker, where in she tries to pay a visit and eventually meets up with Otto Günsche, who asked as to how did she manage to get in.

While she isn't that of a career prankster, as she prefers to be on the reporting side of things than being on the headlines herself, she learned in the bunker that she was also good at ranting, perhaps even better and straight-to-the-point compared to Burgdorf, despite not being able to rant as fast as the general.

It was also mentioned (and implied) by Burgdorf that Kit's bobbed hair is actually a wig, a nod to the real-life American Girl dolls in which the hair isn't hard-rooted and are glued to the head, and to Abigail Breslin who had to wear a blond wig for her role, being that she has darker hair than her character (although dyeing it can also be an option). Burgdorf also sneered that it was Jodl who deserved to wear Kit's headpiece.

Her treehouse at Cincinnati, Ohio used to serve as her headquarters, but she now usually works at the Führerbunker ever since she took over control of the Reich. It is still yet to be known if she will come up with her own parody crew like what Joseph Stalin, Heinrich Lehmann-Willenbrock, and Muammar al-Gaddafi did in their respective regimes, although Ruthie Smithens has recently showed interest in joining the Parody Universe, and, consequently, her parody crew.

Kittredge was also one of the key people behind the Occupy The Führerbunker movement, wherein she asked several female Red Army soldiers to occupy the bunker.

She was seen in HitchcockJohn's Hitler Explores Space[6] - while Hitler decided to start his own space program and "to boldly go where no Aryan has gone before", it was revealed that Kittredge and Muammar al-Gaddafi came up with their own and launched themselves into space.

Kittredge appeared as a crew member in the second episode of DictatorAntics' The Antic Menace, alongside Merriman, Tukhachevsky and a few others.

She also made a cameo appearance in Soalric Parker's Der Disneygang, where she is seen passing notes to Fegelein. Her role was further elaborated in the novelization, as she volunteered to join the Antic Order resistance effort.[7]

Kit as she appears in the bunker.

Kit after spending an hour boozing with Burgdorf.

She was also known to be extremely proficient in handling firearms.

Kittredge as she appeared on Mad. Complete with freckles and shit.

She seems to have been contemplating on her life or something.

Kit jots down as to who will she mess with next.

Kit eventually gave in to Ruthie and decided to go on a fairy-tale spree. 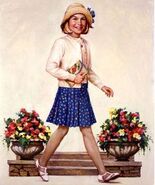 The junior journalist and the antic master himself.

She eventually got bored of antics.
Add a photo to this gallery

Retrieved from "https://hitlerparody.fandom.com/wiki/Kit_Kittredge?oldid=82384"
Community content is available under CC-BY-SA unless otherwise noted.