Karl Dönitz (16 September 1891 - 24 December 1980) was a German admiral during WWII, and as Großadmiral (Grand Admiral) the commander of the German Navy (Kriegsmarine) from 1943 to its end. He became the last German Reichspräsident (President of the Reich) after Hitler's suicide and acted as his successor during the last days of the Third Reich.

Dönitz was born in Grünau in Berlin, Germany. In 1910, Dönitz enlisted in the Imperial German Navy (Kaiserliche Marine). On 15 April 1911, he became a midshipman (Fähnrich zur See), the rank given to those who had served for one year as officer's apprentice and had passed their first examination. Dönitz became a captain on one of the Kaiserliche Marine's U-boats. He was sunk and captured after an aborted convoy attack. After WWI ended in 1918, Dönitz remained in a British camp near Sheffield as a P.O.W. until July 1919, returning to Germany in 1920.

Between the wars, Dönitz formulated the tactics that would be used by his U-boats: A U-boat would find a convoy and radio in to Dönitz, then he would order it to shadow the convoy until other U-boats gathered. They would then attack in large numbers on the surface at night, taking advantage of the U-boat's speed and small shape on the surface.

In late 1942, after a U-boat was nearly destroyed after attempting to rescue hundreds of Allied sailors and civilians, Dönitz issued the Laconia order, forbidding U-boats from rescuing survivors. This led to at least one shooting of survivors by a U-boat.

After both Hermann Göring and Heinrich Himmler were declared traitors by Adolf Hitler, he specified in his last will and testament that Dönitz was to succeed him as President and Head of State, while Goebbels was to succeed as Chancellor and Head of Government. After the suicide of Goebbels and Bormann death while trying to flee Berlin, Dönitz remained the sole leader of the crumbling German Reich.

Although head of the Navy, Dönitz had never played a large role within the Nazi regime, and he succeeded Hitler essentially by default. Dönitz led what was left of Nazi Germany for about one week, from May 1 until the formal signing of the surrender agreement on May 8.

Dönitz was released from prison on 1 October 1956, and he retired to the small village of Aumühle in Schleswig-Holstein in northern West Germany. There he worked on two books. He died there of a heart attack on 24 December 1980. The West German president Karl Carstens received Dönitz's "political testament" a few days after his death. Dönitz, who seemingly still considered himself to be the true head of the German state, "transferred" his position as "leader of the German people" to Carstens. Carstens and the German government ignored this illegitimate testament of the former Reichspräsident.

Like Steiner, he never appeared physically, only mentioned on several occassions; for example, Hitler tells Keitel to fly out of Berlin to assist Dönitz.

He has minor roles in The Assassination of Hitler and The Jodl Rebellion; in the former he leads his own faction in the leadership struggle, and in the latter Jodl intends to replace Hitler with Dönitz as the Reich President.

Dönitz was played by Thomas Kretschmann in The Sinking of Laconia, and many parodies that feature scenes from the said film, portray him as Fegelein, particularly Resolution Revolution and Der Frozengang. Fegelein himself tells the other generals that he'll be Dönitz in "Laconia" - Fegelein wants to be Dönitz.

Fegelein thinks he's Karl Dönitz.
From The Sinking of Laconia. 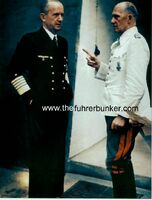 Dönitz, behind Hitler, fantasizing about wearing his hat.