Justin Drew Bieber (born 1 March 1994) is a Canadian pop singer who gained popularity through YouTube which he utilized to launch his singing career. However, he has also gained infamy due to his songs, which most people find annoying. His songs became much better with the release of his 2015 album Purpose though some still hate them. He's also infamous for his pranks and his attitude.

﻿Many Untergangers despise Justin Bieber's work, and have often reflected their thoughts on this in the parodies, some even going as far as to have Hitler attempt to eliminate Bieber, with varying degrees of success. As a result, he is often depicted as the primary personification of "bad music," serving as something of a foil to Kate Bush.

In some of the parodies, Bieber is shown to be rather violent. For example, he shoots his driver when he tries chickening out in Bieber's escape during "Hitler Plans to Have Justin Bieber Killed." He then proceeds to try and shoot the Joker, but fails.

It was taken to the ultimate extreme in a series of videos focusing on the war with the United Bieber Fever Alliance, an organization of teenage girls determined to destroy Hitler after Peter Högl assassinated Justin Bieber (the same guy who executed Fegelein), ultimately leading to a massacre of their headquarters at the hands of Lt. Colonel Bill Kilgore and the murder of Justin Bieber himself.

Hitler orders Bieber to be killed by Högl again after he mocked Manny Pacquiao. He gets shot by a lot of people (mostly haters) as seen here.

Justin Bieber also made a cameo in The Twelve Days of Christmas with Hitler and Friends, when Hitler found him carolling at the bunker, having been redirected there via an antic by Joseph Stalin.

Bieber has a counterpart in the Mirror Parody Universe named Rebeib Nitsuj, whose role is switched with Kate Bush, making him the one of the greatest singers in the mirror universe.

In December 18th 2013, Bieber published on Twitter that he would retire from his singing career. A week thereafter he wrote he would officially retire, saying he was sick of the lies and desires from the press to see him fail. His manager Scooter Braun later denied the announcement, claiming in a statement that Bieber would only be on a hiatus. And again, this has sparked a few parodies showing Hitler's reaction to this.

On January 23rd 2014, Bieber was arrested in Miami, Florida and charged with driving under the influence and resisting arrest. His arrest was protested by an extreme portion of his fan base, which included social media death threats to authorities. Despite being later released from police custody on a $2,000 bond, which Hitler went on a classic rant about, Bieber's person was involved in a petition to the United States government, which involved the Canadian pop singer's deportation from the United States, which Hitler showed interest in being involved in.

In August 26th 2017, an assassination plot against Bieber was launched by a man who was none other than Hitler. The plot succeeded when Hitler successfully killed Bieber by shooting many holes on him at night. But Bieber managed to survive the ordeal at the end, unaware that he can revive himself as Fegelein always did when he died.

We all know what came next.

Justin Bieber with his 2010 hairstyle, appearing in his music video "Baby". 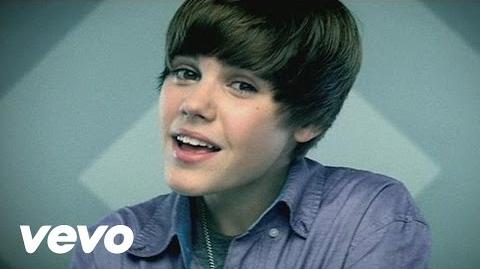 Retrieved from "https://hitlerparody.fandom.com/wiki/Justin_Bieber?oldid=80234"
Community content is available under CC-BY-SA unless otherwise noted.