Premier of the Soviet Union

Premier of the Soviet Union

Adolf Hitler
“Mankind is divided into rich and poor, into property owners and exploited; and to abstract oneself from this fundamental division; and from the antagonism between poor and rich means abstracting oneself from fundamental facts.”
―Joseph Stalin
“...wie Stalin!”
―Hitler in the Original Bunker Scene
“Kinky!”
―Joseph Stalin
“ I do not trade a lieutenant for a Marshal.”
―Ioseb Jugashvili

Iósif or Joseph Vissarionovich Stalin  (Russian: Ио́сиф Виссарио́нович Ста́лин; born Ioseb Besarionis Dze Jugashvili; 18 December 1878 – 5 March 1953) was a Soviet politician and head of state who served as the first General Secretary of the Communist Party of the Soviet Union's Central Committee from 1922 until his death in 1953. After the death of Vladimir Lenin in 1924, Stalin rose to become the leader of the Soviet Union, which he ruled as a dictator.

He appeared in many parodies so far, and is one of the famous Soviet characters to appear after Eduard Khil. Most of his parody personification is taken from the Russian telefilm Tukhachevsky, Conspiracy Marshal discovered by Benad361.

In the Downfall Parody Universe

Stalin is mentioned once in Downfall: during the Original Bunker Scene, Hitler screams:

"Ich hätte gut daran getan, vor Jahren alle höheren Offizieren liquiedieren zulassen, wie Stalin!"
(I would have done a good deed if years ago, I would have eliminated all senior officers, like Stalin!)

In the Downfall parody universe, Stalin often appears with him making a speech, and it of course - involved Hitler and Fegelein.

In later parodies made using the Russian Tukhachevsky, Conspiracy Marshal telefilm, Stalin has his own crew as Hitler does. He seems to have several answers to Hitler's crew, such as Nikolai Yezhov, his vicious diminutive secret police chief to inform him (albeit much shorter than Günsche), Mikhail Tukhachevsky, a Marshal in the Red Army and his Antic Commissar answer to Fegelein, Marshal Budyonny, his answer to Grawitz, etc. These Stalin Parodies featuring Stalin's crew are the brainchild of Unterganger Benad361.

Stalin may be the counterpart or even antithesis of Adolf Hitler. Yes, he's a dictator who may fall into bouts of anger, but unlike Hitler, a bipolar mess who rants to absolutely everyone and everything and uses excessive profanity and hate speech, Stalin's reprimands are much more restrained, and directed mostly to one person (such as Tukhachevsky, whom he somewhat personally dislikes) rather than to everyone as a whole. He tends to speak slowly and carefully and ranting seems to be used as his last resort, or to emphasize a point he feels strongly about. Generally, while Hitler is brimming with emotion and fuming with anger, Stalin is bitingly sardonic. When things are going his way Stalin is "affably evil", but even in the face of bad news he retains a sarcastic gallows humor. The exemplary case is when in October 1941, Army Commisar Stepanov called Stalin from the frontline, to tell him the Red Army was being overwhelmed by the Nazis and that he recommended retreating what men they could to the east of Moscow, abandoning the city. After a long silence, Stalin calmly said, "Ask the comrades if they have any spades". Sepanov asked the military commanders around him, and he replied to Stalin, "Yes, we do have spades. What should we do with them?". Stalin then matter-of-factually responded, "Tell your comrades that they should take their spades and DIG THEIR OWN GRAVES. We will not leave Moscow." Stalin then hung up, and stayed in Moscow as well.

Because Stalin seems too "stoic" compared to Hitler and keeps his cool, and Hitler keeps mentioning his name in the Original Bunker Scene just like Fegelein, it's theorised he might be an Antic practicioner as well, collaborating to make Hitler's lives even more miserable (e.g. Stalingrad, where Hitler's most elite supersoldiers got owned by Stalin's winter, forever changing the course of the War)

He also took part in the failed antic conference held by Tukhachevsky (in an attempt to foster some parody unity due to the growing threat of war with the newly emerged Antonescu Parodies). When Fegelein attacks and a window in the Antic Jet they are travelling on is smashed open, he is one of the dictators to be sucked out into the atmosphere by the collapse of the air pressure (however he does manage to hold on for much longer than several others did). If he survived (which is likely, given his tenacity) then Tukhachevsky can probably expect severe punishment at some point in the future, for what Stalin will perceive as his failure.

When Hitler reminisces on his last summer holiday (to Skull Island) in August of 2011, it is revealed that Stalin was one of those accompanying Hitler, Ceausescu, Mallory and others, as it was an attempt to reconcile hostilities between the main parody crews in the Parody Universe and foster reconciliation. However it fails, and the adventurers are forced to flee from stampeding Apatosaurus, chased by Venatosaurs, and so on. Stalin is among them, and is seen diving along a collapsing cliff alongside the Apatosaurus, declaring that he wishes he had established the "Dino-Gulag" all along.

In Benad361's Rosen Wars: Revenge of the Plamz parody series, he was the head of the Free Parody Universe Alliance fighting against Michael Rosen's new order (even going so far as to try and assassinate him) , until his escape ship was obliterated in Episode 4, killing him instantly. However, in his will, he made Tukhachevsky the head of the alliance in his stead.

Stalin is also shown to have once pulled an antic on Hitler at some point - shooting him with a pistol as he took out his rubbish.

He was the main antagonist in The Half Russian Queen by Gachaganger. He plotted to kill Chuikov's daughter, Anastasia, to prevent him from making peace with The Reich. His plan would later be foiled, which causes him to be demoted by Chuikov to One-star General under Georgy Zhukov and making Chuikov the new Premier of the Soviet Union.

Portrayal in the media

Stalin, as he appears in his parodies. 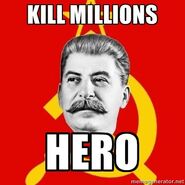 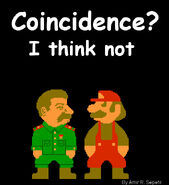 No such thing as coincidence. 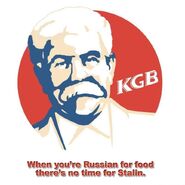 No city without it.

Stalin talking with Zhukov in the movie Battle of Moscow.

Stalin in The Death of Stalin.
Add a photo to this gallery

Stalin in his less kinky mood.

Stalin having a victory relax in 1945.
Add a photo to this gallery

Retrieved from "https://hitlerparody.fandom.com/wiki/Joseph_Stalin?oldid=84939"
Community content is available under CC-BY-SA unless otherwise noted.