Minister of Public Enlightenment and Propaganda

Paul Joseph Goebbels (often pronounced /ˈɡɜrbəlz/ in English, German: [ˈɡœbəls]; 29 October 1897 – 1 May 1945) was a German politician and the Reich Minister of Propaganda in Nazi Germany from 1933 to 1945. As one of Adolf Hitler's closest associates and most devout followers, he was known for his zealous oratory and anti-Semitism. He was the chief architect of the Kristallnacht attack on the German Jews, which historians consider to be the beginning of the Final Solution, leading towards the genocide of the Holocaust.

In Downfall, Goebbels is portrayed as the "sidekick" to Hitler. Everything Hitler has said, Goebbels would agree with, and many times, he further elaborated on them. For example, in the Hitler is Informed Scene, Goebbels' words reinforced Hitler's suspicion about Göring's Verrat, and possibly influenced Hitler to rant and order his execution. In most scenes however, he simply sat or stood beside Hitler silently, acting like a prop. Goebbels has never been shown to disagree or object to Hitler openly. The only time he begged to differ was when he approached Traudl Junge, crying that he disobeyed Hitler's orders to leave Berlin. He was also one of the few male subordinates that Hitler never expressed any dissatisfaction towards.

Goebbels is extremely loyal to Hitler and the Nazi cause. In fact, he may be the most loyal of Hitler's subordinates, such that he had a hand in his children's deaths because he and his wife believed that "there was no future without the National Socialist regime".

After Hitler died, Joseph Goebbels became the new chancellor, and his first action was to rant at his generals (Goebbels rants scene) like Hitler. Unfortunately, he neither had the charisma nor aura that Hitler commanded, and none of the generals took him seriously. Krebs and company openly disobeyed his orders not to surrender by approaching the Soviets under a white flag by themselves. He also took his six children in the bunker during the events of Downfall, in which he eventually had them "taken care of" by injecting morphine and finishing them off with cyanide capsules, in response to the stories of brutality, rape and tea-bagging by the advancing Soviet troops. Shortly afterwards, Goebbels and his wife went up to the garden of the Chancellery, where Goebbels shot Magda (as she wanted him to do), before shooting himself.

Goebbels' last orders were for the soldiers in the bunker to burn his body along with his wife's, just as Hitler's remains had been burned to ash so they couldn't be paraded around by the victorious Allies. Unfortunately for him, they'd already used up most of what little gasoline they had left. Thus while their corpses were horrifically burned, it was still clearly recognizable as Goebbels' (it helped that Goebbels had a metal leg).

Failing to cheat his fate, Goebbels' corpse was thus heavily photographed, and the pictures of his body (and the ones of his own children that he had killed) became one of the most powerful images symbolizing the end of the Third Reich.

In the Downfall parody universe, Goebbels is described as the "skeleton" of the bunker (in contrast to Göring, Bormann, Jodl and Grawitz's chubby appearance), as some of his associates would ridicule him for his skinny build. His rants attracted the attention of Untergangers, who would use his fiery arguments to their advantage. Many Untergangers, such as Hitler Rants Parodies, have shown Goebbels to be a loyal ass-kisser, often to the point in which Hitler treats him like a close friend.

However, a few others such as Benad361 have shown Goebbels to be able to be a defiant of Dolfy's rule, to the extent that Benad361 has had him be the Deputy leader of the separatist faction fighting Hitler's regime in the 'Bunker Civil War'. Prior to this, he shows him furiously ranting at Hitler and hurling insults before walking out. FuhrerFegelein has portrayed Goebbels as having very much a will of his own, to the extent that he will rant at Hitler over certain issues (such as running out of hair gel) and even going so far as to insult Hitler at the end of his rants. He even had Goebbels abuse Hitler with "You fuck!" Bossimias briefly showed Goebbels' autonomous thought and defiance when he portrayed him as being one of those complaining of Hitler's attachment to a picture of a cute pig in wellies and advocating destroying it (in the parody: "Günsche displays a picture to Hitler"). Sparx476 was perhaps the first to portray Goebbels' strong will and defiance when he had Goebbels ranting and complaining about Hitler to fellow bunker-inhabitants in his parody: "Hitler plans to bump off Dr. Goebbels". Goebbels is defiant to the extent that Hitler has him eliminated, and even Goebbels' wife Magda participates in the plot (which also involves Albert Speer). In TheSilverUniverse's Hitler's Llama Priest, Goebbels/Skeletor disagrees with Hitler's plan, and on multiple occasions pleaded him to turn back; he is later revealed to be a supernatural entity with attachment to the place. In The GoebbelMan, Goebbels is missing from the parody - he instead stand in for the titular GoebbelMan. However, in general, he is portrayed as Hitler's loyal ass-kisser.

Because of some situations he is shown to be a good ranter, and even to pose some competition with Hitler as the best ranter. He has a pencil which can make other people rant called the Pencil of Rantmageddon, which was created by FuhrerFegelein. He also has his Stare Of Silence (created by UberFührerParodies). When he stares at someone ranting, he/she stops ranting immediately and goes silent out of fear. It can also block the effects of superweapons like Hitler's Pencil of Doom by stopping the user from talking. He also has his Hand Clap of Doom (created by notoriousrob01) which has similar effects to Fegelein's Fist of Mass Destruction.

A recurring joke with Goebbels is his appearance. Some of the characters believe that he looks half-dead, which has been referenced a number of times. This has also earned him the nickname of "Skeletor". This is also mentioned when Hitler plays the FegelStation. When selecting the character Mr. Grimm, a skeleton character From Twisted Metal 2, Hitler exclaims "What the fuck is Goebbels doing in this game!?"

The second (and increasingly most popular) joke is in the Goebbels Rants Scene. At one point in the scene he sounds as if he is saying "giggity" in English twice. This has been frequently played on by Untergangers, some of whom have looped it for hilarious effect.

As of June 4, 2011 rollercoster3 has made a series called Ask Goebbels. So far it has been a big hit with over 330 views. [update]

In Soalric's Hitler Tries to Kill Fegelein, Goebbels revealed that he has had a lifelong dream of becoming a young children's author, much like Dr. Seuss or Margaret and H.A. Rey. Goebbels also appears as the main antagonist in Soalric series Der Disneygang, in where he betrays Hitler and attempts to take over all media (such as Disney, DC, Marvel, Hasbro, etc). but is eventually stopped by Fegelein, a Disney rebellion, and the Antic Order's combined efforts.

In Deltaforce62's Parodies, Mohnke and others called him Joseph or Joe rather than Skeletor.

His counterpart in the Mirror Parody Universe is Slebbeog Hpesoj, who is also Reltih's propaganda minister. Slebbeog, however, doesn't believe what he's saying as much as Goebbels.

Supernatural creatures based on Goebbels

Due to his legendary scariness, many paranormal entities seemingly take his form, in order to scare their intended victims. An example of this is the GoebbelGhost, which appears to be a spirit punishing powerful persons who it thinks are evil. This off course also includes Hitler, who gets banished to the spirit world for his sins, with the Goebbelghost taking over his body. In the end, the evil spirit releases Hitler from the spirit world, when he realizes Hitler's life is hellish enough as it is, with all of his incompetent generals and having to endure numerous of Fegelein's antics.

Another ghostly entity looking like Goebbels is Candle Face, which appears every Halloween and is able to posses other people, which happened to Traudl. Hitler managed to defeat it with his Pencil of Doom, but implied it would return next year. Later, it is revealed Joseph Goebbels is actually a disguise for this creature.

A third Goebbel-esque entity is The GoebbelMan, which were summoned into the bunker accidentally by Traudl, who actually tried to disprove the myth, by calling his name three times in the mirror, similar to the Bloody Marry. Even before his appearance he manifests himself by calling people by phone to mark his victims. Once summoned, he is able to possess people which in turn can attack others.

In HitchcockJohn-Benad361's The Menace of The Fegel-Forest, Slender Man is revealed to be the evil twin of Goebbels. The latter tried to talk Slender Man out of his...menace but gets captured like the rest.

A full list of portrayals of Joseph Goebbels can be found in his character page in the Internet Movie Database.[1]

Goebbels's Stare of Silence. The Silence will fall.

Goebbels (left) uses his stare of doom, while Bormann (right) looks up to avoid seeing its effects.

The Stare of Confusion.

Von Greim is given the Stare of Silence.

Skeletor at its scariest.

Goebbels' final stare at his Magic Mirror on the Wall

Skeletor and Mother Marowak having a stare-off.
Add a photo to this gallery

Dear Friend Hitler Goebbels. He too has a killer stare.

Inglourious Basterds Goebbels about to greet Landa. Minus the stare and dead face.

Inglourious Basterds Goebbels in the cinema with IB Hitler (Note: He Is Crying.)

Goebbels as seen in Disney's "Education for Death". Even more of a Skeletor than in Downfall. 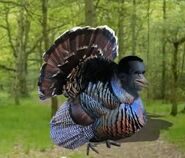 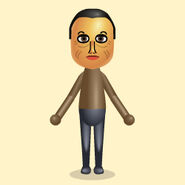 Skeletor as a Mii.

Goebbels expresses his displeasure of working in a bunker with blundering fools.

Goebbels as the demonic Candle-Face.

Goebbels' days in the Wild Hunt .
Add a photo to this gallery

A photo of real Goebbels. 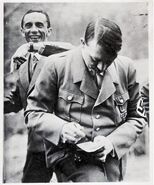 The real Goebbels having some fun playing antics on Hitler's back. 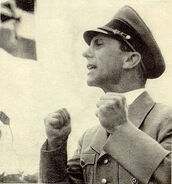 Goebbels about to punch the Hitler from the nearby photo. 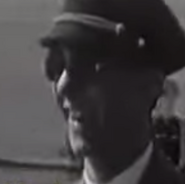 ... and after finding out that the photogropher was Jewish.
Add a photo to this gallery

Retrieved from "https://hitlerparody.fandom.com/wiki/Joseph_Goebbels?oldid=82066"
Community content is available under CC-BY-SA unless otherwise noted.