A Fistful of Dynamite character

John Mallory was an Irish demolitions expert, who had worked in the Irish Republican Army before being forced to leave the country. He eventually fled to Mexico somewhere around 1913, where he found himself drawn into their own revolution.

In the Parody Universe, Mallory seems to have a strong grudge against Adolf Hitler, as he has on several occasions attempted to blow him for reasons unknown. Parodies in which he appears frequently involve Hitler getting caught in some form of explosion by the end, such as the entire Führerbunker getting blown up, Mallory crashing an explosives-laden locomotive into a train Hitler happened to be riding, or even just walking into the bunker and throwing a stick of dynamite at him. He also frequently forces his lackey Juan Miranda to help him out in various ways.

Hitler first encountered Mallory while on vacation in Otto Günsche's trailer. Mallory happened to stumble across the trailer while riding his motorcycle and threw a stick of dynamite inside, much to Hitler's anger. Mallory later pursued Hitler back to Berlin where he attempted to blow up the bunker. He briefly stopped in an effort to avoid capture by Felix Steiner, during which time he single-handedly massacred his army. Shortly afterward, Hitler tried to get back at Mallory by getting another demolitions expert, but he managed to destroy the bunker before a suitable opponent could be found.

Mallory later made a deal with Hermann Otto Fegelein in which he managed to aquire a Fegel-Locomotive. He ended up loading it with explosives and crashing it into a train occupied by the bunker staff, resulting in everyone except Günsche, Fegelein, Traudl Junge, and Gerda Christian getting sent to the hospital with serious injuries.

Mallory also had a major supporting role in The Twelve Days of Christmas with Hitler and Friends, in which he teamed up with Nicolae Ceaușescu, Muammar al-Gaddafi, and a number of other dictators, ultimately crashing the Christmas party.

While Mallory's main objective is to blow up Hitler, he has no objections to the performing of Antics against him and even tries his own hand at them from time to time. In one case he tricked Juan into liberating a group of antic lovers whom Hitler had arrested.

Mallory and Juan were part of the party of adventurers (composed of key individuals from all the parody crews in the Parody Universe) who took part in an adventure on the legendary Skull Island, in an attempt to reconcile their differences. It went disastrously wrong, and they ended up in all manner of dangers, from fleeing a stampeding Apatosaurus herd to escaping predatory Venatosaurs, and a massive Apatosaur collision. Several were killed (Yezhov, Jodl and Gaddafi) but the majority, including Juan and Mallory, seem to have successfully escaped. It is unclear what further adventures they had on the island.

John Mallory reportedly has a counterpart in the Mirror Parody Universe named Yrollam Nhoj, who is also skilled with explosives. However, unlike the parody universe, it is Reltih who has repeatedly tried to blow up Yrollam.

John Mallory and his motorcycle.

John Mallory, always ready with a stick of dynamite.

Mallory after a successful day at the office.

Mallory's got a plan to blow up Hitler, and it looks like Juan's going to have to help him. 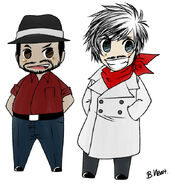 Fanart of Mallory and Juan.

(Left to right): Mallory, Gaddafi, Werner, and Ceausescu fleeing the Apatosaurus stampede.
Add a photo to this gallery

Retrieved from "https://hitlerparody.fandom.com/wiki/John_Mallory?oldid=56046"
Community content is available under CC-BY-SA unless otherwise noted.