During the Second World War, he presided over two successive military dictatorships and allied Romania with Nazi Germany. This close alliance lasted until the 23rd August 1944, when he was deposed in a coup and later tried, convicted and executed by the communist regime in 1946.

Many Romanians now see Antonescu as a hero who was doing what was best for Romania. However, any achievements were washed away by his involvement in the Holocaust and the massacres he ordered.

Attemps at rehabilitation have been fruitless, mainly because many have involved either anti-semitism or have ignored important historical aspects.

In Benad361's Antonescu Parodies, he has been presented as an ambitious dictator, eager to gain mainstream acceptance in the Parody Universe, even though the Romanian King himself objects to his plans.

He has allied himself with Oglinda Hitler (the Hitler featured in the film Oglinda, used in the parodies) to try and take on the parody universe.

He was one of the key Parody Universe figures to participate on a holiday/adventure to Skull Island with Hitler, Fegelein, Stalin, Lt. Werner and others in August of 2011, as an attempt to end the hostility between the warring parody groups. He makes a brief appearance when seen fleeing from the stampeding and hostile dinosaurs with the others.

He also makes an appearance when he reluctantly agreed to do the presentation for the Unterganger of the Month awards in December 2012. King Michael is rude to him (effectively trolling him), and he briefly rants as a result, before storming out of the palace in rage.

In Benad361's Rosen Wars series, he appears in Episode 3 as a member of the Free Parody Universe Alliance's ruling council, and thus an opponent of Emperor Rosen and his new order. He is forced to evacaute to Russia, after Rosen's forces overrun Romania. After the bombing of Moscow begins, he evacuates to Planet Tukhachevsky, alongside the others. In Episode 5 he is revealed as a traitor who provided information to Emperor Rosen. He was exposed, and denied the allegations. However, when offered to shake on his denial by Gaddafi's son Khamis, he instead shot him with a concealed pistol on a spring-mechanism. He was then killed by Tukhachevsky.

He also appears in DictatorAntics' Antic Menace series, as a key character in Episode 4. He is seen at the UN meeting, alongside characters such as Harrybo, Saif Gaddafi, and others. He reports that antics have also been encountered in Romania. Later on, when fighting over the antic dust, he punches Syrian leader Bashar al-Assad, breaking his jaw.

He was portrayed in the respective movie (Oglinda) by Ion Siminie. The movie was controversial, owing to the fact that it twisted historical facts and was very biased in support of the dictator - a fact which most viewers sadly seemed to endorse at the time. 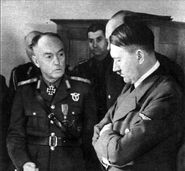 Antonescu as seen in Oglinda, the film used for the parodies.

Antonescu punches Bashar al-Assad, breaking his jaw.
Add a photo to this gallery

Retrieved from "https://hitlerparody.fandom.com/wiki/Ion_Antonescu?oldid=83848"
Community content is available under CC-BY-SA unless otherwise noted.