Start a Wiki
Note: For a wider range of information, refer to the Inglourious Basterds Wiki.

Inglourious Basterds is a 2009 war/alternate history film written and directed by Quentin Tarantino.

The film tells the fictional story of two plots to assassinate the Nazi Germany political leadership, one planned by a young French Jewish cinema proprietor (Laurent), and the other by a team of Jewish Allied soldiers led by First Lieutenant Aldo Raine (Pitt). They cross paths with the SS colonel Hans Landa (Christopher Waltz), who decides to "help", but not before he asks the Americans to reward him. The Basterds (Donowitz and Omar) manage to kill Hitler and Goebbels and thanks to Shosanna who already set the theatre on fire they manage to blow up the Nazis. Landa surrenders to Raine and as bonus gets a swastika carved into his forehead.

The film received mixed ratings, although almost all critics have praised Waltz's portrayal of Landa.

There is a strong rivalry between the Downfall parody universe and Inglourious Basterds' one. The IB Hitler is shown to be extremely annoyed by the Downfall Hitler. He is not impressed by Dolfy's pencil and claims that he doesn't need some "stupid lame crayon weapons". He is also furious on how can Fegelein escape with his antics, claiming that he will never let anyone do something like this to him (although he seems to forget that he's also incapable of capturing the Basterds, and instead he only threatens, just like his Downfall counterpart).

Downfall Hitler once interviewed him, although the interview quickly turned into an insult brawl. Downfall Hitler later decided to kill IB Hitler while the latter was watching parody clips of the former in a cinema[1].

Apart from the rant scene, other scenes used in parodies involve Hitler yelling at private Butz and the one where he's watching a movie in the cinema.

Hans Landa, the main villain, who doesn't want to appear in Downfall parodies. 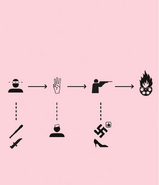 A simplified version of the film.
Add a photo to this gallery

Retrieved from "https://hitlerparody.fandom.com/wiki/Inglourious_Basterds?oldid=76009"
Community content is available under CC-BY-SA unless otherwise noted.