Inge Dombrowski was a Hitler Youth soldier, who fought against the Soviets in the Battle of Berlin.

Like many other teenagers and kids, she was recruited in the Hitler Youth. She was positioned to a flak gun, along with Peter Kranz and a few other "soldiers". When Peter's father, Wilhelm, came to take his son, he confronted the Youth Lieutenant, who was commanding the post. The lieutenant tells him that he should be proud of his son, that he destroyed two tanks. Inge defends him, saying that they will all fight to the last man. Wilhelm points out that they are in a trap, the Soviets will surround them. Inge claims that they will fight back with the flak gun and, despite the fact that Wilhelm points out that the Soviets will outnumber them, she ignores him and claims that they have all taken an oath.

When they finally fought, during night, their cannon damaged itself from all the rounds it has fired, rendering it useless. The rest of the Youth abandon their post and flee. Inge however, remained with the HJ Lieutenant. After a brief exchange of words, she hands him her gun and raises her hand, giving the Nazi salute. After a short hesitation, the lieutenant shoots her, and then he shoots himself out of remorse. Peter later finds her partially buried body.

Inge appeared in a few parodies, most notable in the scene where Wilhelm wants to get his son back.

In Hitler Rants Parodies's parody Hitler Vs Justin Bieber Fans: Episode 2, she is a member of the United Bieber Fever Alliance.

Inge and the HJ Lieutenant, behind the scenes.

Inge without her helmet. 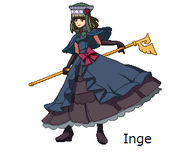 Retrieved from "https://hitlerparody.fandom.com/wiki/Inge_Dombrowski?oldid=78635"
Community content is available under CC-BY-SA unless otherwise noted.