HitlersBankai was a Second-generation Unterganger from the United States who used to upload parodies every weekdays. Most of his parodies featured Downfall characters with green-tinted skins, because they serve as crossovers to The Incredible Hulk. HitlersBankai also invented the Good News and Bad News with Adolf Hitler segment and the new Fegelein is informed segment to his channel. He currently has 48 subscribers and over 18,000 video views.

He made his debut on November 22nd, 2012 with his first parody The Incredible Hitler - 01 - Bringen Sie Mir Fegelein, however he uploaded a trailer for the series a day before. As time progressed, he would introduce his Good News and Bad News with Adolf Hitler series as well as Fegelein is informed segments.  He was also known for his most popular parody, Fegelein is Informed that he is Thomas Kretschmann .

His final parody was uploaded on March 8th, 2014, being Hitler doesn't want to wait for his turn at the phone. However, it is implied that he has silently retired from unterganging due to over five years since uploading his last parody.

HitlersBankai would use both the traditional and modified traditional styles in his parodies, as well as the aformentioned green-tinted skins on his downfall characters. His subtitles are often a yellow colour. Sometimes he would deviate from his original styles such as a gaming one in Gametime with Hitler - 01 - Hitler and Fegelein plays Injustice  or bits of FX in The Incredible Hitler - 03 - Hitler VS Fegelein Part 1 as examples. 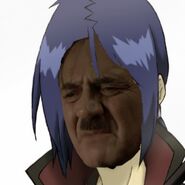 His current youtube avatar.
Add a photo to this gallery

Retrieved from "https://hitlerparody.fandom.com/wiki/HitlersBankai?oldid=82909"
Community content is available under CC-BY-SA unless otherwise noted.