Hitler is a Mall Santa

Hitler is a Mall Santa is a parody by PunchOfJustice, uploaded on Christmas Day 2013. It tells the tale of Hitler who had to work part time as a mall Santa to make some quick cash to buy presents for his generals, who have spent the originally allocated money away. As of February 2015 the parody has over 110,000 views.

It's snowing outside and inside the bunker the holiday festivity is in the air. Bonkers (Mohnke) enters the planning room and asks Hitler about his plans. Hitler replied that he's going to Berlin Mall to go shopping for presents for his generals, using his debit card drawing money from his bank account to pay for it. Jodl then interrupts, saying that they've used up all the money from the debit card (hence the bank account) while they were in Vegas on dirty movie rentals in their rooms, adding that Hitler gave up the card while drunk after seven martinis. Hitler is shocked, and gets the explanation on why he got charged for a "Schindler's Fist" movie.

Hitler is disappointed, as he wants to get off Santa's naughty list by buying presents for his generals. Bonkers suggested that Hitler take a seasonal job at Berlin Mall to make some quick cash. Hitler wholly agrees, convinced with his excellent resume that he'd get the best job the mall has to offer.

As it turns out, Hitler only gets a job as a mall Santa, and has to put up with crying toddlers, mischievous kids pulling his beard off, babies pooping on his lap and childish grown-ups alike (including Jodl, Fegelein and a pant-less Burgdorf). This went on for two weeks until 24 December.

Back in the bunker, Hitler describes his experience as a traumatizing torture that violates his basic human rights, and he would have gone insane if it went any further, likening it to the Tenth Circle of Hell. Jodl again interrupts, asking Hitler to dress up as Santa one more time. Hitler objected strongly, but relented after everyone else pleaded along.

Hitler thus have his staff taking turns to sit on his lap and ask for presents. Krebs ask for a map of the Mediterranean, his 28th one. Burgdorf ask for a shot of whiskey, ignoring the fact that that's what he's been doing all the time. Jodl ask for more plans to object. Fegelein declined sitting on Hitler's lap, putting his black pet jaguar Mr. Cuddlepants instead, which immediately attacks Hitler. The Goebbels children, in a choir, requested toys, a less frightening face for Dad and a new husband for Mom. Günsche comes wearing mistletoe on his chin, and when asked why, explains that he wish for his first kiss. As Hitler questioned why he have not asked Gerda for that, Günsche smooches Hitler instead. Eva wants out of the bunker, something Hitler desperately yearned as well.

Eventually, the line of people is clearing up, and Hitler looks forward for the last person. That person turned out to be Göring, who crushes Hitler and putting him in the hospital.

Inside the ward, Hitler is agitated at what happened, including him ending up spending the cash earned in the two weeks for medication, and calls it his worst Christmas ever. To top it off, nobody came to wish him. He then spotted a box of presents. Hitler is joyed, thinking somebody is on his side, but as he opens the lid, Mr. Cuddlepants jumps out and attacks him.

Führerbunker
Where Hitler resides, as usual.
Berlin Mall
Where Hitler originally intends to go to shop for presents, but ends up working there as a mall Santa for two weeks.
Las Vegas
Apparently the whole of Hitler's staff went there at some point, where they take Hitler's debit card away from him whilst drunk and spends the money intended for the presents renting adult movies in their rooms instead.
a hospital
Where Hitler gets treatment after getting crushed by Göring.

Outside the bunker in December

Santa Hitler with a toddler

Ditto, with a baby that pooped in his diaper 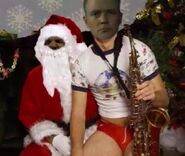 The Goebbels children signing their wish

Hitler's expression as Göring approaches him

The present is Mr. Cuddlepants!
Add a photo to this gallery
Retrieved from "https://hitlerparody.fandom.com/wiki/Hitler_is_a_Mall_Santa?oldid=70417"
Community content is available under CC-BY-SA unless otherwise noted.