The Hitler Youth (Hitlerjugend in German, abreviated HJ) was a paramilitary organization of the Nazi Party. It existed from 1922 to 1945. The HJ was the second oldest paramilitary Nazi group, founded one year after its adult counterpart, the Sturmabteilung (the SA).

The HJ were viewed as future "Aryan supermen" and were indoctrinated in anti-Semitism. One aim was to instill the motivation that would enable HJ members, as soldiers, to fight faithfully for the Third Reich. The HJ put more emphasis on physical and military training than on academic study. The HJ was organized into corps under adult leaders, and the general membership comprised boys aged fourteen to eighteen. The HJ was also seen as an important stepping stone to future membership of the elite Schutzstaffel (SS).

In 1940, Artur Axmann replaced Baldur von Schirach as Reichsjugendführer and took over leadership of the Hitler Youth. Axmann began to reform the group into an auxiliary force which could perform war duties.

In 1944, some of their units were brought to France in order to combat the Allies after D-Day to help stem their advance. They served in the same capacity during the final months of the war (as seen in Downfall).

The Hitler Youth was disbanded by Allied authorities in 1945 as part of the denazification process.

The Hitler Youth is an important part of the film, being a parallel story with Hitler's downfall. The role of the child-soldiers is meant to show the fanaticism of the Nazi leaders and the futility of war. Notable members are Peter Kranz, Inge Dombrowski and the HJ sergeant. Most of them are fictional characters.

In the film, only one platoon is shown in detail, the one Peter Kranz is in. The group is tasked to man a flak nest to thwart Soviet tanks. Peter's father Wilhelm visited to persuade the HJs to end the pointless charade and to get his son back. Peter, however, break formation and instead join a street battle with regular Wehrmacht soldiers, fighting with a Panzerfaust. In the end, everyone in the platoon either disband or killed themselves, such were shown to happen to Dombrowski and the HJ sergeant.

The Hitler Youth appear in many parodies. Many involve the scene with the AA nest.

The HJ are supposed to be the UBFA in Hitler Vs Justin Bieber fans.

Artur Axmann, the leader of the Hitler Youth.

Hitler awards the Youth.
Add a photo to this gallery

In Other media / Spoofs / Resemblances 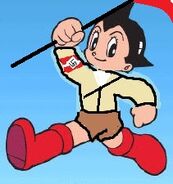 Best robot in the Reich
Add a photo to this gallery
Retrieved from "https://hitlerparody.fandom.com/wiki/Hitler_Youth?oldid=57663"
Community content is available under CC-BY-SA unless otherwise noted.