The Hitler Laughing Scene, also known as Hitler's Trollface Scene, is a scene in the extended edition of Downfall which is sometimes used in parodies.

The scene is most notable for the facial expression that Hitler makes during his conversation with Eva.

Eva Braun, Traudl Junge and Gerda Christian come back from a walk with Blondi due to the air raid warning and they sit down with Hitler. Eva talks to Hitler about the statue she saw earlier in the Reich Chancellery garden and wishes for it be taken down. Hitler says he can't do that as the statue might belong to the state, or someone else, but Eva begs for an exemption. Hitler laughs at her request mocking her logic. At the end of the scene, artillery fire is heard. Heinz Linge and an unnamed soldier close the airlock doors of the bunker.

A few notable examples where this scene is used include Hitler discusses Fegelein with Eva and Eva's secret. In Hitler Rants Parodies' parody, Hitler sends Hermann Fegelein to space and after a suspiciously loud noise when Hitler is talking with Eva they fear for the worst; Fegelein returned to the bunker as assumed later.

The so-called 'trollface' of Hitler in this scene is often added to a parody to show Hitler gloating about something. When this scene is added to a parody, it is usually zoomed in, to avoid showing Eva. It is also frequently used for head pasting spoofs, such as in KakashiBallZ's The Hitler Hunter and several others. A version of it can be found in Staedty86's parody pack.

It has also been rotoscoped into other scenes to remove Eva, such as in Dollar Store Hitler. No raw rotoscoped greenscreen of this scene has been made available. 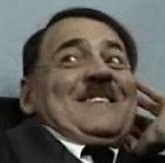 Hitler Gangnam Style.
Add a photo to this gallery
Retrieved from "https://hitlerparody.fandom.com/wiki/Hitler_Laughing_Scene?oldid=84128"
Community content is available under CC-BY-SA unless otherwise noted.