The Hitler Council was an organization whose stated aims were facilitating cooperation between the different Hitlers. It was also known as the Council of Hitlers, though the latter name is now used to refer to all renditions of Hitler throughout history.

Cooperation between the Hitlers hardly ever went smoothly, with rivalry for glory quickly turning them against each other. Downfall Hitler even ended up forging an alliance with Downfall Fegelein to kill Inglourious Basterds Hitler – it succeeded, but Fegelein later tried to kill Downfall Hitler as well[1].

The organization was ultimately dissolved when Downfall Hitler killed Valkyrie Hitler despite Jodl's warnings, kick-starting the War of The Hitlers. 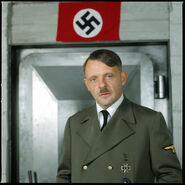 Hitler: The Rise of Evil Hitler
Add a photo to this gallery

Retrieved from "https://hitlerparody.fandom.com/wiki/Hitler_Council_(Hitler_Rants_Parodies)?oldid=63008"
Community content is available under CC-BY-SA unless otherwise noted.