Hitler's Secreterial Interview is the first scene in the actual film (with the beginning being a segment from a documentary), and the second one in Downfall’s running time, set a few minutes into the movie. It is used fairly often in parodies.

In the dead of night, a group of women from Berlin walk towards the Wolf's Lair, escorted by some guards, while being eyed by others. Once inside in the Wolf's Lair, Heinz Linge greets them and offers them a seat, stating that the Führer is currently feeding Blondi. Hannah Protovsky asks him how to greet him, and he tells them to act natural, say "Heil, my Führer" when greeted and without the Nazi salute, as Hitler is looking for a secretary.

Linge proceeds to Hitler's room to inform him of the ladies' arrival and Hitler emerges from his room. He greets and shakes hands with the women one by one. He lastly greets Traudl Humps (later Junge) and after learning of her Munich background, he takes a liking to her. He invites her to his room. Hitler introduces Traudl to Blondi and offers her a seat in front of the typewriter. He asks her of her age and she replies twenty-two. Hitler proceeds to dictate his speech and Traudl tries to keep up but stops midway after failing to keep up. He looks at the written text and suggests that they try again.

Traudl emerges from the room. She tells the others that she has been appointed Hitler's personal secretary, and they congratulate her.

The whole scene has been used by Robert Tolhurst in Hitler checks his new neighbors aren't Romanian, in which there's another bunker for the ladies to move into; and by AtomicAntics in Hitler's Fart Contest, where Hitler had the applicants guess his lunch based on the smell of his flatulence.

In KakashiBallZ's parody Hitler challenges Fegelein to a game of Jeopardy!! this scene appears mostly for portraying Heinz Linge as the host of the show. A similar trick was used later by avidsonicfan1991 for parodies of Wheel of Fortune and The Price is Right! game shows.

Linge leading the women in.

Linge instructing the women on how to address Dolfy. 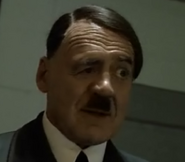 Hitler showcasing what a boss he is.

Traudl gets congratulated by the other candidates.
Add a photo to this gallery
Retrieved from "https://hitlerparody.fandom.com/wiki/Hitler%27s_Secretarial_Interview?oldid=85778"
Community content is available under CC-BY-SA unless otherwise noted.