Hitler's General Discussing Scene is a scene in Downfall that is commonly used in parodies. It shows Alfred Jodl and Wilhelm Keitel’s discontent at Hitler’s plans, Hermann Fegelein’s scheming and suggestions that the generals disobey, and Wilhelm Burgdorf’s scornful response.

Keitel remarks on how Hitler has lost all grip on reality. Jodl complains that Hitler moves around units that only exist on his map and that he tries to mobilize Felix Steiner's unit, which can barely defend itself, to fight. Fegelein asks him why he doesn't just tell Hitler the truth, but Keitel quickly cuts in saying that he doesn't listen. Fegelein says somebody should do something. Keitel confronts him, arguing that Hitler will just throw them out as he did with Gerd von Rundstedt and Heinz Guderian. Fegelein asks him what's the problem, and Jodl tells him that they, as soldiers, have taken an oath, to which Fegelein asks him if that stops them from thinking. Burgdorf, annoyed, questions what he just said, calling him an opportunist and a ruthless careerist to which Fegelein replies saying Wie bitte?.

The scene is commonly used by many Untergangers, usually being a continuation of the Hitler plans scene (which it actually is), while several parodies feature it as a standalone video. Other times it's meant to be Jodl talking about various things. The part where Burgdorf is angry on Fegelein is sometimes portrayed as Burgdorf being angry on whatever antic Fegelein just pulled. Sometimes Burgdorf calls Fegelein an opportunist.

The shot where the camera focuses on Fegelein is also very commonly used on its own. Most of the time, this scene is added to a parody to make it look like Fegelein is interacting with other characters, or just to show him gloating about his latest antic. 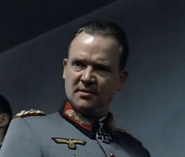 Fegelein answers back.
Add a photo to this gallery
Retrieved from "https://hitlerparody.fandom.com/wiki/Hitler%27s_Generals_Discussing_Scene?oldid=84379"
Community content is available under CC-BY-SA unless otherwise noted.