Hitler's Farewell Scene is a scene in Downfall that is sometimes used in parodies.

Hitler and Eva Braun are shaking hands with several people lining up in the corridor in front of his room, in order, from left to right. The first few people are hard to determine from the angle but it's presumably Walther Hewel, an unknown general, Wilhelm Burgdorf and Hans Krebs. Next to Krebs is Joseph Goebbels, who gives Hitler a cold stare, and then Magda Goebbels to whom he gives a party badge, calling her the bravest mother in Germany. After a brief look at Gerda Christian, he looks at Traudl Junge, who looks saddened. He pats her left arm and slowly leaves. Eva gives her a hug and tells her to give her greetings to Bavaria. As Hitler walks away, he takes a short look at Otto Günsche, who looks at Heinz Linge standing on the other side of the doorway. He then enters his room along with Eva who is now in the lead.

Shortly afterward, Traudl runs away and stumbles on the Goebbels children, who are sitting on the stairs. She asks them what they are doing, and they tell her that they want to see Aunt Eva and Uncle Hitler. They haven't eaten anything, except breakfast. Traudl then takes her coat off and goes up to find them some food. There she stumbles upon drunken officers and enters the kitchen, while they joke about Berlin being full of warehouses ("where" houses?).

The scene was first used by AlbertHallProds in Hitler Practices his Chat Up Lines, albeit heavily edited. Two years later, Hitler Rants Parodies used it in Hitler goes to bed. The scene is also used sometimes when Hitler is about to leave on a trip or similar.

Although the scene is poor in dialogue, clever editing (i.e. voice-overs) made it possible for Hitler to reveal his thoughts.

The part where Hitler enters his room has also found much use, especially in FX parodies, where Hitler is depicted entering a different room, for example. 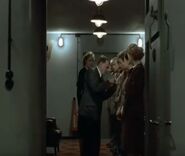 Hitler takes off the button to give to Magda.

The kids sitting on the stairs.

The avatar of AlbertHallProds comes from this scene.
Add a photo to this gallery
Retrieved from "https://hitlerparody.fandom.com/wiki/Hitler%27s_Farewell_Scene?oldid=84393"
Community content is available under CC-BY-SA unless otherwise noted.