Mathias Gnädinger,
Harold Slikk (voice in FuhrerFegelein's parody, Göring has lost his watch, and he is not happy)
Gary Schwartz (Frequently depicted with Team Fortress 2 Heavy voice by WonkyTonkBotty

“...”
―Göring, while staring at his watch.
“Das ist die Rollen van Hermann Göring”
―Gnädinger about playing Göring.
“Voice or no voice, the people can always be brought to the bidding of the leaders. That is easy. All you have to do is tell them they are under attack and denounce the pacifists for lack of patriotism and exposing the country to danger. It works the same in every country.”
―Proving Göring can in fact speak, and quite deserving of his IQ index

After serving as a pilot in the Jasta 11 fighter wing in WWI, he became addicted to morphine and, resulting from that, became extremely obese. He joined the Nazi Party at 1922, becoming Adolf Hitler's de-facto deputy and presumed successor. In 1935, he assumed command over Germany's Air Force. At 1940, he received the rank of a Reichsmarshall.

By 1943, after the Battle of Stalingrad, Göring lost much of his political power and retreated to his estate. In 1945, after it was obvious that Hitler was doomed to die in Berlin, he sent a telegram to the Führerbunker in which he declared that he would consider himself as the state's leader after Berlin would be completely isolated, Hitler was enraged and ordered his arrest, appointing Robert Ritter von Greim as commander of the Luftwaffe in his stead, ordering that he'll be arrested - and executed if Hitler would die. That order was not carried out, and Göring survived to be tried in Nüremberg by the Allies. He was convicted of committing crimes against humanity and war crimes, but took his own life before he could be executed.

Despite his fate being mentioned in the Epilogue and credited in Downfall, his screentime is horribly reduced to the Hitler Planning Scene, occurring on 20 April 1945, where he only sits, listens, and glances at his watch.

Having left the bunker, he later sent a telegram to the Führerbunker to ask permission to assume control of Germany should the telecommunications out of the bunker is cut off, and assume that the Führer is incapacitated. While Hewel agrees to the reasoning, Goebbels think of it as effectively a coup. This enrages Hitler, who ordered him be arrested, relieved of his position as head of the Luftwaffe (which was later given to Robert Ritter von Greim), and for him to be executed should he die.

Göring has a minor appearance in the film Downfall, when he looks at his watch during one of Hitler's yada-yada conversations. Since he never actually speaks, Göring doesn't always have a major role on-screen in the parodies. Despite this, his enormous obesity and his letter being the source of Hitler's rage, makes him a fairly common character in parodies.

A few parodies do feature Göring in person prominently. Göring Falls Asleep, for example, through clever editing, centered around him constantly falling asleep in the middle of one of Hitler's planning sessions and everyone's attempts to wake him up. Later in "Göring has lost his watch, and is not very happy", Göring is shown to be able to rant profusely from the loss of his watch, thanks to the Angry German Kid lending his voice to him.

The much rarer behind the scenes video actually showed Gnädiger talking, and this has been exploited by Streptokokkeninfekti in his parody where Constantin Film shoots a documentary in Hitler's bunker. This marks the first time ever that Göring is shown in a parody to speak in person. BigUndertaker's Hitler goes to Silent Hill series followed suit shortly after, in which Göring refuses to follow Hitler in his quest, and instead concentrating on his pizza. Due to the fact that this clip has been revealed, the amount of parodies featuring Göring has significantly increased.

Göring's obesity and his addiction for eating enormous quantities of both edible and inedible things, especially fast food, has become the most common subject of parodies based on him. Examples include a series of videos by Hitler Rants Parodies in which he begins eating Blondi's dog food, leaving Hitler struggling to acquire enough for both of them. In the parody "Hitler is on a Plane", it was revealed that Goering had eaten all the food and catering staff on Lufthansa Flight 666. He was promptly put down.

Another running joke is that Fegelein is routinely able to bribe Göring into aiding his antics using simple foodstuffs (i.e. cookies) and/or drugging them.

Göring's affinity for food has had other negative consequences for him as well. For example, when Hitler's cake was stolen , Goebbels was able to easily allay suspicion from himself by blaming Göring for the theft.  Hitler attempted to interrogate Göring and extract a confession, but failed, showing that while Göring might be unable to resist goodies in normal situations, he is incredibly tough when under pressure.

It's rumored that Göring isn't fat, but allegedly keeps both a large amount of animals inside his clothes, as shown in Bossimias' parodies; and his heavy appetite. He lets animals out through his sleeve when he looks at his watch.

In Gachaganger's parodies, due to Gacha Life not having fat settings, Göring is not as fat, rather a giant like Günsche. He is a friend of Saika Totsuka, the best friend of the stupid giant and would do anything to protect Saika, giving Dolfy a swirly twice, first for badmouthing Saika and second for hurting Saika and Gachaganger. He is also the uncle of Astro Boy in The Wonder Child and the step brother of Astro's father, Bill Tenma.

It has been demonstrated as of 23 December 201*[citation needed] that Göring is capable of committing Antics, consisting of him sending a telegram to the Führerbunker with the Uncle Fucker song.

In other parodies [citation needed], Hitler tried to get Göring to eat Fegelein as an attempt to get rid of him. Although Göring seems to be able to eat pretty much everything else, as always with the Master of Antics, he claims to have found Fegelein inedible, much to Hitler's dismay.

He likes To Dance.

Göring flirted with Hitler's mother on her second visit to the bunker, and their horrible lovemaking noises can be heard across the whole bunker to the disgust of Hitler and a few generals.

When his Downfall actor Mathias Gnädinger passed away on 3 April 2015, parodies are made associating it with Göring himself being dead because of his horrible diet.

He serves as the main antagonist of the collaboration series Hitler Sends Göring to Africa; in the series, Hitler punishes Göring by exiling him to Africa after eating Krebs' fishes, hence the title.

As the series progresses, he ends up conquering all of Africa. When he invades Italy, he gets seemingly killed by Hitler; he would return in the second season to menace Hitler and the rest of the bunker before being defeated again by both Hitler and Fegelein, only to return yet again in the third season, this time commanding an army of Pantheons from Mega Man Zero in an attempt to reconquer Africa.

Göring talks about how big was the cake he just ate.
Add a photo to this gallery

In Other media / Spoofs / Resemblances

Valkyrie Göring: just like his Downfall counterpart, he sits in a chair, doesn't speak and is a fatass.

The Bunker Göring about to inhale The Bunker Speer

Battle of Britain Göring, trying to conceal his fatness from bystanders.

War and Remembrance Göring. He's not very happy that his supply of cheeseburgers did not arrive on time.

Göring about to cook Fegelein.

Göring as seen in Disney's "Education for Death"

Another version of "Education for Death" Goring

Göring in drawing version. by Fikamar27

Göring showing us how big his plate of Burger King whoppers was.

Göring and Dolfy in the Whitest Kids universe 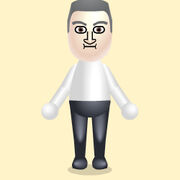 Göring as a Mii. 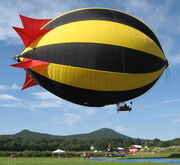 The Monuments Men Göring, looking at the menu in reality. He's not onto pictures.

Nuremberg Göring. After he was sentenced to death, he soon reincarnated as the infamous cannibal gentleman who lost his weight. 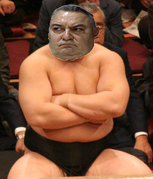 Göring once attempted a career as a sumo wrestler, he wound up eating most of his opponents.

An even fatter Göring!

Goring when he saw Traudl

Gacha Life Göring. Not much of a fatso
Add a photo to this gallery

Göring in color. Not quite as fat as his downfall counterpart.

Göring as a kid. 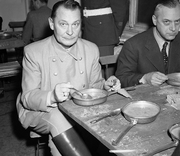 Göring caught in the act.

Göring wearing a pot on his head and pretending he's a soldier.

"This is the so last time I eat baked beans."

Göring instructs the waiter Fegelein to order five of each and every item in the menu.

Herman Göring's Fokker D. VII, how he managed to fit in the cockpit much less get off the ground is a mystery to modern science. Some say he ate the plane instead.

Göring eating the whole table. (That's just his breakfast. Wait till he eats his dinner.)

Göring in Prague. The only reason he was there is that H-man told him they were going to McDonald's.

Before Krebs... there was Göring!

A picture that will make the whole bunker mind blown. It's really Göring.
Add a photo to this gallery

Retrieved from "https://hitlerparody.fandom.com/wiki/Hermann_G%C3%B6ring?oldid=84934"
Community content is available under CC-BY-SA unless otherwise noted.