Captain Heinrich Lehmann-Willenbrock (11 December 1911 – 18 April 1986) was the Captain of U-96. He served as a major character in the fictionalized autiobiography Das Boot, which was later on adapted into the 1981 film of the same name by Woflgang Petersen.

In Das DRM - The Director's Cut, Willenbrock was referred to as 'Uncle Neal', meaning that he had been possessed by Neal Stevens, owner of Subsim.com, who later released the footage.

Captain Willenbrock can be described as good-natured officer who strongly disagrees with the ideology of the Nazi Party. Because of this, he is very supportive of Antics committed against Adolf Hitler, and while not a Master of Antics himself, he is a close friend of Captain Philipp Thomsen, the navy's Grand Master of the Antic Order, and is more than willing to help Werner with his schemes. In addition, Willenbrock has the benefit of free medical care from the worst of injuries, as Werner managed to help him survive after Hitler bribed Elizabeth Hurley to shoot him through the throat with a harpoon.

Willenbrock has also started up his own amusement park, NavyLand, which is a navy-themed park located underwater.

Willenbrock recently got a chance to perform an inceredibly daring antic of his own. His scheme involved tearing himself into a hole in the fabric of space and time. The resulting hole created a bridge between the Parody Universe and it's mirror counterpart, creating mass chaos throughout Berlin and bringing Hsub Etak into Hitler's office. It is unknown if anyone else from the mirror universe crossed over or vice versa.

He was a captain in the Free Parody Universe Alliance fleet in Benad361's Rosen Wars: Revenge of the Plamz series (in Episode 5). He assists Admiral Traudl Junge on her command ship, leading them to a pyhhric victory against Admiral Bashar al-Assad's fleet, and thus saving Planet Fegelein. However they are both killed when the defeated admiral launches part of his destroyed command ship into their ship. He survives the collision, but not the subsequent explosion of the ship.

At some point in time he was possessed by Neal Stevens of Subsim.com, and forced to play an unmodded version of Silent Hunter 5: Battle of the Atlantic, with the associated crashes, bugs and required internet connection. Mr. Stevens later released the footage as Das DRM - The Director's Cut. It is unknown wether or not Mr. Stevens has apologised, or if Willenbrock has played the far superior modded version of the game as therapy.

His counterpart in the Mirror Parody Universe, Captain Kcorbnelliw-Nnamhel Hcirnieh, commands the U-Boat 69-U and often fails at his schemes to the actions of Reltih.

Comparisons with Other Leaders

If you've got an antic, if nobody else can help, and if you can find them, than maybe you can hire the A-Team. 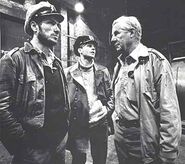 The real Captain Willenbrock meets his parody counterpart.
Add a photo to this gallery

Retrieved from "https://hitlerparody.fandom.com/wiki/Heinrich_Lehmann-Willenbrock?oldid=83509"
Community content is available under CC-BY-SA unless otherwise noted.