Hitler (In some parodies.)

“Hewel! Come over here!”
―Himmler calling Hewel to discuss Hitler's new plan
“How long do you think you can keep this up?”
―Himmler to his student/disciple Fegelein
“Don't be so ice-cold, Speer.”
―Himmler to Speer before surrendering to the Allies
“Himmler....Unter allen ausgerechnet Himmler!”
―Dolfy

Heinrich Luitpold Himmler [IPA: haɪnʁɪç hɪmlɐ] (7 October 1900 – 23 May 1945) was Reichsführer of the Schutzstaffel, a high-ranking military commander, and a leading member of the Nazi Party. As Chief of the German Police and later the Minister of the Interior, Himmler oversaw all internal and external police and security forces, including the Gestapo. The Gestapo (Geheime Staatspolizei) was the secret police of the Nazis just so you know. Serving as Reichsführer and later as Commander of the Replacement (Home) Army and General Plenipotentiary for the entire Reich's administration (Generalbevollmächtigter für die Verwaltung), Himmler rose to become one of the highest-ranking of Hitler's lieutenants, along with the likes of Joseph Goebbels, Rudolf Hess, and Hermann Göring.

Unlike the other generals who stick by Hitler until the very end even though they privately admit the war is lost, SS Reichsführer Himmler and his adjutant Hermann Fegelein planned to outright abandon Hitler and get him to leave Berlin. Ironically, Hitler considers Himmler to be his must trustworthy friend, "the loyalist of my loyals". Himmler does make one last attempt to encourage Hitler to try to surrender and achieve some kind of diplomatic end to the war, but Hitler will have none of it. Thus Himmler decides to leave Berlin, under the cover story that he's heading north to the Flemsburg government on the Denmark border to help resistance there.

As Himmler explains to Fegelein, he actually secretly plans to meet with the Allies and try to surrender to General Eisenhower. Himmler believes that the Allies will want to keep Himmler and his SS around so that they can maintain order in post-war Germany (as it would be more difficult to control millions of people running around in chaos afterwards).

A textbook example of the old adage that "evil cannot understand good", Himmler fatally miscalculated Ike's willingness to work with the SS. No sane moral person would want to work with Himmler due to his involvement as one of the chief architects of the Holocaust and other Nazi atrocities, even for the slight benefit of having the SS maintain order after the war ended. Instead, Himmler was arrested and bluntly told that he would stand trial for Crimes Against Humanity, which he would assuredly be convicted of due to his high-level involvement in the Nazi state. Himmler's smug concerns about whether to "give Eisenhower a handshake or the Nazi salute" were wiped away in the face of this. As a result, the moment his guards were temporarily distracted, Himmler committed suicide by taking a cyanide pill, which he had smuggled in disguised as one of his medals. Thus he was not among those later tried at Nuremberg.

Himmler is generally recognized as the "Legend of Antics" and the mentor to Hermann Fegelein. Unlike Fegelein, Himmler started his career at a young age and was mentored by his father Joseph Himmler in the art of antics. As mentioned in the previous section, Himmler's father, who was a school principal, would have his son Heinrich spy and punish his schoolmates (this is known by anticologists as reconnaissance or "snitching."). After World War I ended Himmler met his future antic victim, Adolf Hitler, and participated in the famed Beer Hall Putsch. However, his participation in the putsch was anything but productive due to his indelible urge to commit antics. Defying Hitler's orders to "shut the fuck up!" about the operation, Himmler told the local police about Hitler's plans and eventually landed Hitler and most of his men in prison.

There was also an alternate theory concerning Himmler's origins in the Downfall universe, which was that he was actually Klaus Baudelaire, and that he took the identity of "Heinrich Himmler" so that he won't be tracked down by the fire-starting side of the V.F.D., an elite secret organisation that was involved in a schism. Baudelaire's whereabouts were the subject of a documentary written by Lemony Snicket entitled A Series of Unfortunate Events,[1] and since then the fate of Klaus and his sisters eventually became known to the general public, although little did they know that he actually ran off and lived under an assumed name.[2]

As for Fegelein, Himmler's friendship with his adjutant was also a subject of the above theory, as there was some evidence to support the rumours that Hermann was actually Klaus's longtime friend Quigley Quagmire, and that he also took a false identity after he survived the incident where he and his brother and sister were nearly sucked by The Great Unknown. Fegelein was known by his bunker mates to be quite adept at cartography, and that he occasionally implies that he has a twin brother and sister, which was also true with the Quagmires.

Himmler is also confirmed in the Universe, to have at least one son, Junior Himmler. Said son made his only appearance in Benad361's parody, "The Battle of Fegelosis". His Mother and possible other relatives are as yet unknown.

In Benad361's parody "Bashar al-Assad comes to the Bunker" Himmler mentioned that he had been away giving "antic tuition" to Gaddafi's antic master, his son Khamis. He may have done the same for Stalin's Fegelein, Tukhachevsky, possibly explaining their improved skill in antics. It is not known how many other antic-masters he teaches/taught. He and Tukhachevsky are allies, and possibly friends too. Himmler has complemented Tukhachevsky's antics before.

In November 2014, Himmler *finally* invented his new superweapon, the 'Nazi Salute of Abrupt Failure', which he was able to use to cause all manner of targets to fail at their activities, from causing an assassin to burst into flames, to causing a huge spacecraft to crash. He and Hewel tried to use it to stage a coup against Hitler, but the Fuhrer was unphased, possibly planning a counterattack.

Himmler smiles because Fegelein is his best friend.
Add a photo to this gallery

The Bunker Himmler and his Fegelein. Regardless of the movie, they always plot something against Hitler.

Himmler in the 18th century, wearing the golden necklace of the antic order. 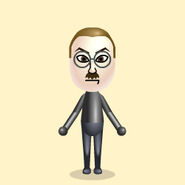 Himmler as a Mii.

Himmler and Fegelein running over Hitler's car in a tank. 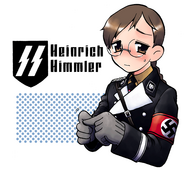 A moe transgeneration version of Himmler.

My Führer Himmler, getting upset with Goebbels for becoming a pirate.

Donald Pleasence as Himmler in "The Eagle has landed"

Himmlah in HOI IV
Add a photo to this gallery

Himmler in 1907. Unlike Fegelein, Himmler was introduced to the art of antics at an early age. His similarity to Klaus Baudelaire eventually became a subject of a legend among anticologists, who theorised that he was actually the Baudelaire orphan.

The man in lederhosen (leather pants)

IRL Himmler grinning.
Add a photo to this gallery

Retrieved from "https://hitlerparody.fandom.com/wiki/Heinrich_Himmler?oldid=83363"
Community content is available under CC-BY-SA unless otherwise noted.