Harald Quandt (1 November 1921 – 22 September 1967) was a German industrialist, stepson of Joseph Goebbels. After World War II, Harald and his half-brother Herbert Quandt ran the industrial empire that was left to them by their father.

Harald Quandt, born in Charlottenburg, was the son of industrialist Günther Quandt and Magda Behrend Rietschel who had married in 1921. Although the couple divorced in 1929, they remained on extremely friendly terms. Magda later married Goebbels at a property owned by Günther Quandt. Adolf Hitler was Goebbels' best man.

After his mother's re-marriage, Harald remained with his father who became a prominent business leader in the Third Reich. Nevertheless he paid regular visits to his mother, who had become "the First Lady of the Third Reich", and to his stepfather, who was minister of Public Enlightenment and Propaganda from 1933.

He served as a lieutenant in the Luftwaffe during WWII. He was injured and later captured by Allied troops in Italy in 1944, but was released in 1947. Magda and Joseph Goebbels committed suicide after murdering their six children in the Führerbunker in May 1945. Harald was the only one of Magda's children to survive.

After returning to Germany, he first assisted his half-brother in re-building the family firms, and then from 1949 to 1953 studied mechanical engineering in Hanover and Stuttgart, where his family owned large firms (AFA/VARTA in Hanover, a private equity firm in Stuttgart). His father died in 1954, leaving his empire jointly to Herbert and Harald, and making Harald one of the wealthiest men in West Germany.

Quandt had the reputation of being a “committed playboy". He survived an aviation accident at Zurich International Airport but died in 1967 when another of his aircraft crashed in Cuneo, Italy.

Harald Quandt does not appear physically in Downfall and it's only mentioned by Magda when she writes a letter to him where she states her intention to murder her kids.

He is recently seen (the photo anyway) in Soalric's Letters from Eva Braun and Magda Goebbels, where Magda wrote a letter to him, telling him about how Goebbels has been practising his ranting skills and how terrible life in the Bunker is, since Hitler has taken the Xbox and the PlayStation, as well as any other form of entertainment.

A photo of him however can be seen on Magda's desk when she composes the letter. The Harald in the photo is the real one. This means that the photo of him is the only image of a real life WW2 character in the whole film (every other photo of Hitler is based on Bruno Ganz, like the one from Eva's desk). 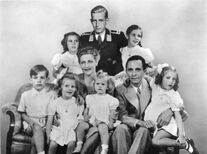 Harald (top) with the Goebbels family. 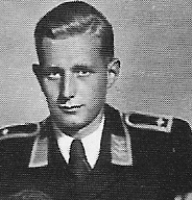 A close-up of Harald from the previous picture. 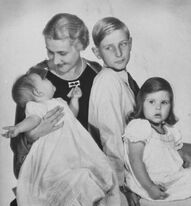 Harald (Top right) with his mother Magda and her first two daughters, Helga and Hilde 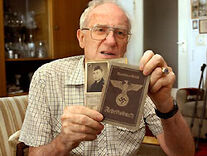 A man (maybe son) holding Harald's documents.
Add a photo to this gallery
Retrieved from "https://hitlerparody.fandom.com/wiki/Harald_Quandt?oldid=81008"
Community content is available under CC-BY-SA unless otherwise noted.