Krebs was born in Helmstedt. He volunteered for service in the Imperial German Army in World War I in 1914, he was promoted to lieutenant in 1915, and rose up the ranks until he became a General of Infantry.

As World War II was ending, he made a telephone call on April 28 to Keitel, and informed him that if relief didn't come within 48 hours, all was lost. He was among the people to court-martial Fegelein after Himmler attempted to negotiate to surrender.

Krebs is the Wehrmacht general who serves as the army's chief of staff. He is also one of Hitler's four highest ranking generals. He usually is in the bunker, directing operations from there. He is shown to be loyal to Hitler, because he was willing to stay with him to the bitter end, even if it means killing himself.

Despite having a chance to escape after Hitler kills himself, he decides to kill himself along with Burgdorf not long after his failed attempt to call for a ceasefire with Marshall Chuikov. In the film, it seems that he is respected by Hitler enough to be allowed to have dinner with him (Burgdorf included).

In the Parody Universe﻿

There are three things that describes Krebs most: maps, fish and Burgdorf.

Krebs is known as the "Map Pointer" because it is his job to point the map of Berlin, and occasionally, other maps as well. He takes great pride in his map pointing skills and gets extremely annoyed whenever anyone interrupts his pointing demonstrations, or when Fegelein orders him to point at other maps. Krebs also seems to be very possessive of his maps, as simply touching them is enough to make him very angry, to the point of ranting. He was revealed to have a map fetish. Hitler usually hates when Krebs talks about it, as he finds it annoying.

Krebs is also obsessed with fish. Often times he likes to amend Hitler's plans to include fish in some way (for example sending fish to kill Stalin or Putin). It also happens that he just likes to talk about fish during planning sessions, no matter how unrelated the subject is to said plans. Hitler also once wanted to buy fish to shut him up (as in this video by Hitler Rants Parodies: Hitler plans to buy fish), but as usual, shiny headed Jodl objected to this. The source of this trait is a Mondegreen, in which the last two syllables of the word 'bewegungsunfähig' (unable to move), as spoken by Krebs during the Planning Scene, can be interpreted as "Fish" - though the actual German word "Fisch" is pronounced like the English word.

One of the more likeable characters in the Bunker, he is also been accused of being the life partner of ranting extraordinaire and musician, Wilhelm Burgdorf. Although many Untergangers insist that they have been married as a gay couple, there is no piece of actual proof to prove them being gay. He has generally been shipped with Burgdorf a lot - mostly for the "fun" of it. However widespread, the shipping rumors should not be trusted forever.

Hans Krebs is also notable for being the only bilingual Downfall character, as he is able to speak both German and Russian. Therefore, he is usually sent to Marshall Chuikov whenever Hitler needs someone to relay messages to the Russians. Sometimes Krebs just goes to visit the Russians to socialize, without any ulterior motives. However, his skill in the Russian language differs between parodies. In one parody, he tried to negotiate peace on Hitler's behalf, but his skill in the Russian language was so bad, he managed to anger the Russians into prolonging the war.

Krebs is more scared of Hitler than Jodl and Burgdorf and so, when the time comes to inform Hitler about the latest misfortune to have befallen the bunker, he attempts to tell Hitler but then loses confidence, sparing him and letting Jodl tell the bitter truth in the end, costing Jodl his shiny head.

Apparently, Krebs is the only general immune to Joseph Goebbels's Stare of Doom, saying that he will make a Halloween head out of Goebbels if the latter keeps staring.[citation needed]

Krebs has a Mirror Parody Universe counterpart named Sberk Snah. He also points at maps for Reltih. His Stalin Parody counterpart is Kliment Voroshilov, who attempts to rival Krebs with his map pointing skills.

My Führer, I want to talk about my fish.

Guess who's coming for dinner.

Krebs and Burgdorf before committing suicide.

The overseer of the Pistol of Mass Destruction. It is unknown whether he suffers brain trauma from being shoved aside by Weidling countless times an instant later.

Trying to complete his sentence...

From left to right: Theodor von Dufving, Hans Krebs and their interpreter to negotiate surrender to the Soviets.

Krebs talking to the Soviets.

The same charismatic look that got Burgdorf's heart hooked.

Krebs sees that there are no more seats. 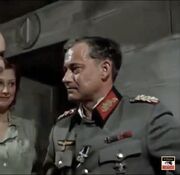 A very kind expression of Krebs. 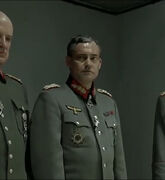 Krebs being nervous after one long rant.

Rare footage of Krebs being in his coat.

Krebs as Hitler, which causes the Downfall Hitler to rant.

Alfred Jodl played Krebs in Die letzte Schlacht. It's unknown if Krebs objected to this.

War And Remembrance Krebs. Although he appears to give the Nazi salute, he's actually covering his face from the annoying stage light.

The rare moment where Krebs love were not for maps... [Taken from LEXX]

His childhood nickname was Krabs. It's unknown how he pointed at maps then.

Biggest fish in the Reich.

Krebs has a business in America! 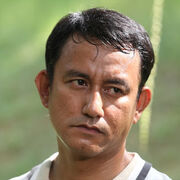 Krebs in his younger years still had a secret aquarium.

[Taken from LEXX] The FBI finally found out from where he buys his fish from.

Himmler tells Krebs to shut up after saying "Fish" for the 4269th time.

This time, in color.

RL Hans Krebs with a map, about to point. On his right is Ernst August Köstring. Note that he is bald, just like Jodl.

Krebs at the Soviet HQ in Berlin, waits outside, while Chuikov shoves Matvey in the closet.