All Godzilla films except for Roland Emmerich's 1998 film[note 1]

Godzilla (ゴジラ, "Gojira") is a kaiju, or a fictional giant monster, created by Toho Company who has appeared in 32 films since his first appearance in the 1954 film of the same name, becoming the company's most notable mascot and IP (intellectual property).

In the Godzilla series

Depending on the film/series, he is either a dinosaur that was mutated and awakened by American nuclear tests or an ancient monster that feeds on radiation (eg. MonsterVerse series).

Throughout his variable appearances, he has been portrayed as either a hero or a villain.

In Cliff Seawall's parody, Hitler vs. Godzilla, Hitler hired King Ghidorah (another Toho kaiju) to kill Fegelein when the Spinosaurus from Jurassic Park III turned down his offer. Krebs informs Hitler of rumors that Godzilla is defending him, though Hitler brushes off his concerns. Eventually, Ghidorah fights Godzilla and loses, causing Hitler to predictably react badly.

In 1979Onetime's parody, Godzilla Visits Hitler's Fuhrerbunker, Godzilla attacks Berlin because Hitler owed him some loan money. When Hitler steps out of the Bunker, Godzilla roars at him, demanding that he pay off his debt. Hitler refuses and threatens to use the Pencil of Doom on the kaiju; Godzilla retaliates by using his atomic breath, instantly killing the former.

In The Godzilla Toy by JennieParker87, where Günsche owns a toy of his MonsterVerse incarnation. Günsche asks him the question, "What do women want and what do they think?" and promises to award him the toy if he can answer. Hitler fails, and later on, during a planning session, Jodl shows the same toy to Hitler. Whether he got the toy from Günsche or bought it himself is left unclear, though the former is implied.

Reich Motion Pictures featured the MonsterVerse versions of both Godzilla and King Ghidorah in his 500 subs announcement video, which also served as a sequel to Hitler's day under(stalked by) Telescreens. The parody is a spoof of Godzilla: King of the Monsters (not to be confused with the 1956 US version of the original 1954 movie).

F-A Alexander featured him in two parodies: first, in Red Army vs. Godzilla, where he destroys a large force of T-34 tanks that tried to stop him and kills both Stalin and Yezhov afterwards, and is also revealed to be allied with the Antic Order.
The second parody is the two-part The Downfall of Godzilla, the latter of which used the film Shin Godzilla - and is depicted to be hostile to all humans. Both parodies are only uploaded on Vimeo due to Toho Company's draconian copyright policies in regards to YouTube. 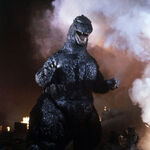 Godzilla in the Heisei series (called "VS Series" in Japan).
This incarnation is used in Hitler vs. Godzilla, Godzilla Visits Hitler's Fuhrerbunker, and Red Army vs. Godzilla.

Godzilla in Shin Godzilla.
This incarnation is used in The Downfall of Godzilla.
Add a photo to this gallery

Retrieved from "https://hitlerparody.fandom.com/wiki/Godzilla?oldid=85086"
Community content is available under CC-BY-SA unless otherwise noted.