Rundstedt was born in Aschersleben, Province of Saxony. He joined the German Army in 1892, then entered Germany′s elite military academy in 1902.

Soon after Operation Barbarossa began, Rundstedt moved east to attack Kharkov and Rostov. He strongly opposed continuing the advance into the Soviet Union during the winter and advised Hitler to halt the offensive, but his views were rejected.

In November, von Rundstedt had a heart attack, but he refused to be hospitalized and continued the advance, reaching Rostov on 21 November. A counter-attack forced the Germans back. When von Rundstedt demanded to be allowed to withdraw, Hitler became furious and replaced him with General Walther von Reichenau. Hitler recalled von Rundstedt in March 1942, placing him once again in command of the West.

After the D-Day landings in June 1944, von Rundstedt urged Hitler to negotiate a settlement with the Allies, his frustration culminating in his outburst, "Make peace, you idiots!" Hitler responded by replacing him with Field Marshal Günther von Kluge. However, von Kluge later committed suicide due to his involvement in Hitler's assasination attempt in July of that year.

One year later, Rundstedt, while in command of the German forces on the Western front throughout Operation Wacht am Rhein (the Battle of the Bulge, also known as the Runstedt Offensive), stongly opposed the offensive from its inception, and essentially washed his hands of it.

He was relieved of command for the last time in March 1945, after telling Keitel once again that Hitler should make peace with the Allies, rather than continue to fight a hopeless war.

Rundstedt was captured by the U.S. 36th Infantry Division on 1 May 1945. During his captivity, he was reportedly asked by Soviet interrogators which battle he regarded as most decisive. They expected him to say "Stalingrad", but von Rundstedt replied "The Battle of Britain". Annoyed, the Soviets "put away their notebooks and left." While being interrogated, he suffered another heart attack, and was taken to Britain, where he was held in a prisoner-of-war camp in Bridgend, South Wales and at Redgrave, Suffolk, England.

He was charged with war crimes, but never faced any trial due to his poor health. He was released from captivity in 1948 and died in Hanover in 1953.

Rundstedt does not appear in Downfall, instead, he's mentioned by Wilhelm Keitel, after he refutes Fegelein's idea of confronting Hitler, claiming that they'll be "thrown out like Rundstedt and Guderian".

The mention of Rundstedt and Guderian is also an indirect explanation of why the generals in the movie are such spineless yes-men. All of the competent generals were gone by that point. When they tried to explain to Hitler that the war was lost, he simply fired them. So, the generals have to comply to Hitler's often ridiculous and impossible-to-pull-off plans under pain of getting dismissed.

He appeared in a parody, headpasted on a monkey, where he is seen eating rotten marula fruits, and becomes drunk. He is later seen sleeping near Weidling. He has not appeared nor mentioned in other parodies so far, even though he objected to Hitler in RL more than Jodl. Rundstedt from the movie Rommel had a short appearance in Superdumpfback's 1000 subscriber Q&A, claiming to be a objector like Alfred Jodl and map-pointer like Hans Krebs. 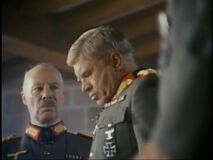 Rundstedt (third from left) with the other Nazi monkeys.

Rundstedt and Weidling, tired after the war ended.

Retrieved from "https://hitlerparody.fandom.com/wiki/Gerd_von_Rundstedt?oldid=74776"
Community content is available under CC-BY-SA unless otherwise noted.