Start a Wiki
Götz Otto is a German actor known for his very tall stature. He is 198 cm (6 ft 6 in) tall and is often characterised by bleached blonde hair in his films.

Otto was born in Dietzenbach in Hesse and his parents ran a bakery in the city. Among his earliest roles, was the one of an SS guard in the 1993 Steven Spielberg film Schindler's List. Later, he played the role of SS-Sturmbannführer Otto Günsche in the critically acclaimed 2004 film Downfall.

He is perhaps most famous for his portrayal of Elliot Carver's henchman Mr. Stamper, in the 1997 James Bond film Tomorrow Never Dies. When called for casting, Otto was given twenty seconds to introduce himself. Saying, "I am big, I am bad, and I am German", he did it in five.

In 2006, he appeared in the UK film Alien Autopsy. He also starred in the film Iron Sky. His portrayal of Billy the Kid in Bremen in 2011 fulfills a long standing desire to act in the Western genre.

He has turned his hand to being an occasional race car driver. In 2007, he raced in the German Mini Challenge VIP car at Oschersleben, but, after a strong performance in the first race, he rolled the car on the second turn of race two. He has been given another opportunity in the Mini Challenge VIP Car as part of the 2008 German Grand Prix weekend at Hockenheim. 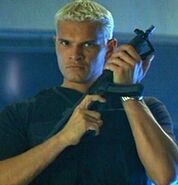 As Klaus Adler in Iron Sky.
Add a photo to this gallery
Retrieved from "https://hitlerparody.fandom.com/wiki/G%C3%B6tz_Otto?oldid=62337"
Community content is available under CC-BY-SA unless otherwise noted.