Start a Wiki
“What are you gonna do?
Map-point me to death?”
―Tornow's response to Krebs who didn't like the joke
“Challenge accepted.”
―Krebs' thoughts about the upper question.
“GÖBEN NEWELL!!! HAHAHAHAHAHA!!!”
―Fritz giving the answer Hewel's joke about a cross between Göring and Gaben
Fritz Tornow was a Wehrmacht sergeant (Feldwebel) and Adolf Hitler's personal veterinarian. He was part of the Panzer-Grenadier-Division Großdeutschland (source: Soldiers of the Leibstandarte by Thomas Fischer). He was tasked with taking care of Blondi.

On Hitler's orders, he poisoned the dog to test the effectiveness of the cyanide capsule Hitler intended to use. According to a report commissioned by Joseph Stalin and based on eye witness accounts, Tornow was further mortified when he was ordered to shoot Blondi's puppies. On 30 April, Tornow took each of the four puppies and shot them in the garden of the Reich Chancellery, outside the underground bunker complex, after Hitler and Eva Braun committed suicide together. He also killed Eva Braun's two dogs, Frau Gerda Christian's dogs and his own dachshund.

On 2 May 1945 the Soviet Army took control of the bunker complex. Tornow was among only four living occupants; the others were Dr. Werner Haase, Erna Flegel, and Johannes Hentschel. They all surrendered to the Soviet troops.

The Downfall Tornow - portrayed by actor Devid Striesow - is the drunk-as-a-skunk guy in the waiting room to Hitler's chamber.

He was also shown to answer the jokes in Bunker Jokes - most of the time to Walther Hewel.

He likes to laugh and dance with Hitler and the generals.

Although his jokes do get the best of many of his audience, but one who believes every one of his jokes goes to far is Krebs. In response, he uses his own ways of saying, "Screw You," to Krebs and most of the time, he wins the verbal battle and it ends. However, when the verbal battle is one, Krebs will use other means to extract his revenge, like taking a gun and shooting his genitalia off and ruining the rest of his life according to parody maker, FuhrerFegelein (The Unterganger who invented Tornow's Bunker Jokes). Krebs' anger toward Tornow result in possibly half of which are jokes about Krebs, as for the others, for some reason, Krebs takes personally.

Most of his jokes are based on Bunker Operatives. While Krebs shows offense more than any other operative to Tornow's Jokes, most of the jokes make fun of Jodl, Goebbels and Göring, since their personalities in Downfall Parodies are probably the easiest to make fun of. 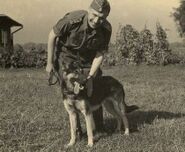 Fritz Tornow and possibly Blondi.
Add a photo to this gallery

Retrieved from "https://hitlerparody.fandom.com/wiki/Fritz_Tornow?oldid=81680"
Community content is available under CC-BY-SA unless otherwise noted.