Start a Wiki
“Mein Führer...Steiner...”
―Krebs about Steiner
“Steiner will...”
―...do or not do whatever Hitler asks him
“Bring me General Steiner!”
―The Bunker Hitler

Felix Martin Julius Steiner (23 May 1896 – 12 May 1966) was a German Reichswehr and Waffen-SS officer who served in both World War I and World War II.

Steiner ranks as one of the most innovative commanders of the Waffen-SS. He skillfully commanded the SS-Deutschland Regiment through the invasions of Poland, France and the Low Countries. He was then chosen by Himmler to oversee the creation of, and then command the volunteer SS Division, SS-Division Wiking. In 1943, he was promoted to the command of III (Germanic) SS Panzer Corps.

On 28 January 1945, Steiner was placed in command of the 11th SS Panzer-Army. His army was part of Army Group Vistula.

On 21 April, during the Battle for Berlin, Steiner was placed in command of Army Detachment Steiner. On 22 April, the Russians outnumbered Steiner's worn out and exhausted unit by ten to one. Hitler gave orders for Steiner's forces through a pincer attack to envelop 1st Belorussian Front, advancing from north of Berlin. Later in the day, Steiner made it plain that he did not have the divisions to do this. On 22 April, at his afternoon situation conference, Hitler fell into a tearful rage when he realised that his plans of the day before were not going to be realised.

Imprisoned until 1948, Steiner was cleared of all charges of war crimes and after writing several books, died on May 12, 1966.

Steiner's role in Downfall is that on an unseen character, as he was only mentioned in a few scenes, most notably when Hitler was informed that the Waffen-SS commander is unable to mobilize his forces, much to the Führer's dismay.

Due to the circumstances in which Steiner is mentioned by Hitler (he was pointing at a map) in the planning scene, Steiner was naturally depicted in the parodies as someone essential to Hitler's plans. This includes being Hitler's driver in parodies where Hitler is planning to go places, courier, or otherwise executioner of all sorts of plans devised by the Führer.

Despite his absence from the movie, Steiner has appeared in one or two parodies thanks to Sony Vegas, most notably Benad361's parody special "The Battle of Fegelosis" where he, along with Wenck (who also makes an appearance, albeit a very brief one, much more so than Steiner's) commands the invasion force. He is also heard speaking for the first time, as well as being seen; when Hitler climbs off a Wehrmacht gunship, and remarks to Hitler, when Hitler approaches him, (in a curiously high-class British accent) "Sir, I have five special commando units awaiting your orders, sir", to which Hitler replies "At least your attack was on time for once, Steiner." He also briefly appeared in HitchcockJohn's parody "Duck, You Führer", where Steiner (played by Duck, You Sucker’s antagonist Colonel Günther Reza) had an ill-fated encounter with John Mallory. These two videos are the only known accounts of Steiner's speech, although both oddly show him speaking English rather than German.

Echoes1224's parody "The Downfall-Steiner Paradox" had the titular paradox caused by Hitler's generals attempting to bring the real-life Felix Steiner into the Parody Universe. Other parodies exist in which Hitler has made his own efforts to meet Steiner, with varying degrees of success.

Steiner also appears in sparx476's parody Hitler finally meets Steiner... where he comes into the bunker. Hitler greets him and Steiner pokes his tongue. This greatly angers Hitler who fires his laser, frying Steiner.

Steiner appears in one of Hitler's dreams in a parody by Gokyr586. He is depicted as a somewhat dark entity who wants Hitler to find an actor to play him in the film Downfall, and attempts to destroy his mind when Hitler refuses to do so.

Meanwhile, in a review of Call of Duty: Black Ops, Hitler complained that Steiner died in the game, probably confusing him with the in-game Friedrich Steiner.

PiretBCN also made many videos about Steiner, mainly from the fact that she is a fan of him, for nationalistic and historical reasons.

Another photo of Steiner.

Steiner rehearsing. Few know that Steiner himself auditioned for his Downfall role. Too bad he didn't get the role. 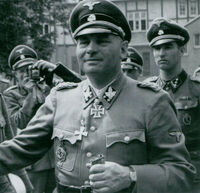 Steiner was a well known star in the Reich.

Steiner's reaction to whatever Hitler wants him to do. 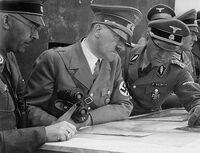 Steiner can point at maps too!

Retrieved from "https://hitlerparody.fandom.com/wiki/Felix_Steiner?oldid=83379"
Community content is available under CC-BY-SA unless otherwise noted.