Felicity Merriman (born 21 April 1765) was an American veterinarian, merchant and anticologist, who was best known for the stories based on her life.

Felicity, who was often referred to as "Lissie" by her mates, is a spunky, independent little girl who's into adventures, horses and committing antics on people, especially her best friend's sister Annabelle (aka "Bananabelle"). She also had a close relationship with her dad's apprentice Benjamin Davidson; the two became a staple of lulz among the American Girl community, as fans of the series would often pair the two and make romantic stuff about them.

She's mostly a tomboy of sorts, as she was often fed up with all the things young ladies at the time were supposed to do, much to her mother's disappointment - like most girls of the time, they were expected to be skilled in handwriting, making samplers and table manners. She can be a little brash and foolish sometimes, like Fegelein, but she's also a gentle, caring and trustworthy person, as she can sometimes be seen with her dad at the shop.

Lissie was mentioned by Adolf Hitler in Hitler is informed about Felicity Merriman's retirement, with the Führer complaining about her being laid off from her "job", and made a cameo appearance in Hitler, the Merrimans and the Tea Party, when her father (who also happened to be a wheelman and an antic dealer) made an ill-fated business deal with Hitler's Reich Corp. She also appeared in Fegelein tampers with Hitler's horse, wherein Fegelein hires her as his newest apprentice and co-conspirator.

Despite the fact that slavery was prevalent during her time, she mostly dismisses it as a "piece of shit" thing to do, being that she hates treating people, regardless of race or nationality, as cannon fodder; she often treats Rose and Marcus, two of their family's servants, as friends and occasional accomplices, as the two would sometimes help Lissie in committing antics.

There are also some times where she wondered why she was born on the 21st of April, a day late from Hitler's birthday, and also a day after 4/20, or Weed Day for marijuana smokers. While she herself isn't that of a weed-smoker, she does sometimes advocate the use of the drug out of sarcasm, as tobacco is taxed by the British colonial government in her hometown. There was even a time when she ordered a batch of weed to be dumped into the bunker's ventilation system[2], even going so far as to personally informing Hitler about her antic.

She was also known to show her more dramatic side at times, such as when she was forced to get off her horse as Jiggy Nye claimed ownership of it. Another instance was when she found out about Constantin Film blocking parodies again, condemning the copyright holders' efforts at limiting the Untergangers' freedom to make parodies.[3][4]

She also made a brief appearance in the fake trailer for a James Bond-style Downfall parody. While it can be noted that she was at the same room as with Grawitz and Goebbels, she only visited them out of random, and "just to see as to how incompetent the Nazis were".

She is also rumored to be a student at the increasingly well-known Tukhachevsky Antic Academy in Moscow, which may explain the rapid increase in her talents.

It is established that she and her father own an antic shop in Williamsburg, Virginia. As the Revolutionary War looms in colonial-era America, Felicity, her dad and her buddy Ben, who were fed up with King George's rather ridiculous restrictions on the colonists, came up with perpetuating various cruel and often comical antics against the British armies, from bribing horses with treats to even lacing tea with a deadly dose of mercuric oxide[5] which was served to oblivious Redcoat officers. Her father was also known to have invented various tools and weapons that were used for pranks, such as improvised explosive devices, Predator missiles and modified Brown Bess rifles, which made it evident that the Merriman family were completely ahead of their time and had a deep understanding of engineering, military strategy and the classical methods of practical jokes.

She first started off committing antics back when she was six years old, as per family tradition since the mid-1600s. Her father Edward first taught her on how to piss off Jiggy Nye, the local tanner, by diluting the tanning solution with dyes, as well as several other pranks. Even the Publick Times town fair was no exemption to her mischief, as she would sometimes rig some of the games, giving her a not-so-fair advantage over the other fair-goers. They were also partially responsible for the infamous Boston Tea Party, during which Edward Merriman and his family became well known in the art of pranks when they dumped some shipments of tea into the river.

Fegelein also had a special connection with Merriman, as the two were known to have an affinity with horses. Hermann was known to have worked in his father's riding school when he was a young boy (and was well-versed with horses), so it isn't that surprising for him and Felicity to get along and commit antics together. It then became clear that Merriman has since been on Hitler's hitlist after conspiring with Fegelein, during the Führer's visit to Williamsburg. This didn't bother Felicity, though, as her family has been into the antics business for several years, and angering Dolfy was considered to be a badge of honour for her, even going so far as to paying a visit to the bunker.

It was also established in the book Very Funny, Elizabeth that Elizabeth Cole, one of Felicity's closest friends, was also a fellow antic-doer[6]; one of their victims was Elizabeth's sister, Annabelle Cole, whom they deride as a "bossy, no-good imbecile" bent at making fun of her sister. Elizabeth was first introduced in the art of antics when she attended an anticology class at Miss Manderly's house together with Felicity.

One of her techniques in committing antics was a tactic known as "mark and execute", where she notes the target that is of strategic importance to her, and goes for the big kill by snuffing him/her out.

Comparisons to other Antic Masters 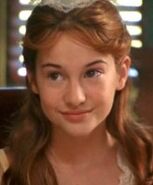 Lissie and Fegelein. The latter must've used the Fegel-Time Machine or something.

Lissie as she prepares to commit an antic along with her best friend. Notice the ladder and what appears to be a tool box in the background.

Lissie as she appears in the original book series.

Felicity in her emo years. She could be doing anything at that moment.

Shai, er, Felicity having some fun time in the snow.

Merriman being in a serious mood again.

Lissie as she proves to Marie Antoinette that the cake is a lie. 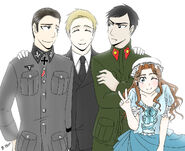 Lissie pulled an April Fools prank on this very website.

Lissie during her vacation in Hawaii. 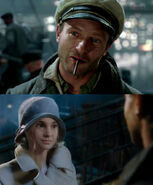 A meeting that was bound to happen.

She's ashamed of herself by not looking in front of the mirror.

Lissie as she was seen doing the laundry with some dude. 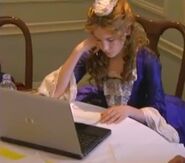 And here's Merriman looking for some antic ideas on her laptop.

Mug shot of Merriman after being pinched for an (unauthorised) protest march in Dakota.
Add a photo to this gallery

Retrieved from "https://hitlerparody.fandom.com/wiki/Felicity_Merriman?oldid=67612"
Community content is available under CC-BY-SA unless otherwise noted.