Fegelein and Himmler at Hitler's birthday

Himmler and Fegelein discussing how to save the Reich.

Fegelein and Himmler at Hitler's birthday, also known as the Fegelein and Himmler Scene, is a scene in Downfall, that is commonly used in parodies. It's commonly used to depict one of Fegelein's antics. This scene reveals Hermann Fegelein and Heinrich Himmler for the first time. In both the movie and parodies, the duo is depicted in devious ways. This scene is closely tied with the Himmler greets Hitler scene, which also happens to be the direct follow-up of this scene.

Fegelein and Himmler enter the main hall of the Reich Chancellery. Immediately, Martin Bormann and Wilhelm Burgdorf spot them and talk among themselves of how the latter is a 'pompous clown' and makes them sick. Burgdorf downs the first-ever alcoholic shot in the movie.

The focus shifts to Himmler and Fegelein talking about Operation Clausewitz and Hitler's intent in bringing the Reich down with him, and they discuss their plan to talk Hitler out of it, possibly dragging Walther Hewel into the plot. Fegelein doubts Hewel's use in the plot. Himmler suggests using Eva Braun, being Hitler's mistress and Fegelein's sister-in-law to talk Hitler out of it. He insists strongly that they do everything they can, seeing that Berlin is "practically surrounded by the Russians," adding to Fegelein that if they don't, he will die and would never see his unborn child. Fegelein concurs.

The focus suddenly shifts when Heinz Linge opening the door introducing Hitler, and out comes Hitler, being saluted by the guests.

Grand Master of Antics Himmler and Antic Master Fegelein plots for another antic towards Hitler. It is not clear why they discuss such matters of high-importance and secrecy in a crowd and within earshot of Burgdorf, but it might be that the Wehrmacht general's intervention would result in more lulz on their part. This scene is also used frequently to have Himmler and Fegelein summarize the insane antics they've committed against Hitler at the end of a parody and to share their thoughts on the lulz it produced.

Certain parodies, like WonkyTonkBotty's Fegelein turns Hitler & the Bunker into a Flash Cartoon, use the part with Himmler and Fegelein talking via rotoscoping.

Rotoscoped clips of Fegelein and Himmler's close up has been made by TheSilverUniverse in his green screen pack.

"Two pranksters walked into a hall..."

Bormann and Burgdorf talking behind the antic masters' back.

"Big Bormann is watching you..."

Himmler explains the next antic plan. 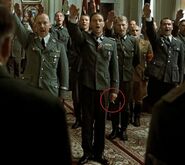 Fegelein was holding a cigarette. (what you never knew, marked in red circle)

The Führer returns the favor.

Fegelein and Himmler in a behind the scenes photo.
Add a photo to this gallery
Retrieved from "https://hitlerparody.fandom.com/wiki/Fegelein_and_Himmler_at_Hitler%27s_birthday?oldid=85788"
Community content is available under CC-BY-SA unless otherwise noted.