Fegelbear is the fourth parody uploaded by Staedty86. The parody is one of the most sucessful Downfall parodies made. Reaching to 25,238 views and 578 likes as of August 2012. The parody incoporates the 1969 film Hercules in New York, Arnold Schwarzenegger's first film to star himself.

The parody starts with the Hitler Reviews Scene, in which Günsche asks Hitler about a bear attack. Hitler has a flashback of when he and Eva were riding on a carriage. In the flashback, Eva insists that Hitler escape Berlin, in which he rebukes the idea. The scene then cuts to Hitler thinking of heading to San Francisco for a vacation. At this moment, the Fegelbear, a mutated beast created by Fegelein, spots the carriage ferrying the Führer and his wife. The mammal approches the vehicle stealthily, unbeknownst to the couple. Hitler spots the bear as Eva screams. Hitler steps out of the carriage and engages Fegelbear in a brawl. Two rangers arrive to the scene to see the commotion. Hitler shouts out lines of curses as he hit the beast. Eva, meanwhile, faints from shock. Hitler gives the bear the final blow before it dies, he then presents the body to the rangers, pronouncing that the Fegelbear "is fucked". The video then flashes to the present where he rants at Günsche to stuff the bear.

Influence on the Unterganger community

The video itself has been famous for introducing the Fegelbear. After first appearing in this video, this creature, or members of the same species made numerous appearances in other Downfall Parodies. Examples of which are Hitler's outdoor picnic and Fegelein's Easter game.

The Fegelbear is also currently used as Staedty86's avatar on youtube. 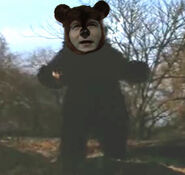 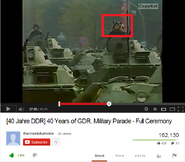 The bear has become so popular that Fegelein decided to put up a shop selling stuffed toys.
Add a photo to this gallery
Retrieved from "https://hitlerparody.fandom.com/wiki/Fegelbear?oldid=71988"
Community content is available under CC-BY-SA unless otherwise noted.