“I want to dance!”
―Eva on "Let's Dance", the German version of "Dancing with the Stars".
“I know a community hole when I see one.”
―Fegelein on Eva

Life with the Führer/Role in Downfall

Braun met Hitler in Munich when she was 17 years old while working as an assistant and model for his personal photographer, Heinrich Hoffmann, and began seeing him often about two years later. She attempted suicide twice during their early relationship, on 10 or 11 August 1932, she attemped to shoot herself in the chest with her father's pistol, but aimed badly. She also took an overdose of sleeping pills, and was living in depression for a while because Hitler couldn't make time for her. By 1936 she was a part of his household at the Berghof near Berchtesgaden and by all accounts lived a materially luxurious and sheltered life throughout World War II. Braun kept up habits which met Hitler's disapproval, such as smoking, wearing makeup and nude sunbathing. Braun enjoyed photography and many of the surviving colour photographs of Hitler were taken by her. She was a key figure within Hitler's inner social circle, but did not attend public events with him until the summer of 1944, when her sister married an officer on his personal staff.

As the Third Reich collapsed towards the end of the war, Braun swore her loyalty to Hitler and went to Berlin to be by his side in the heavily reinforced Führerbunker deep beneath the Reich Chancellery. In Downfall, she was portrayed as stylish, a woman who liked parties, smoked, and was close to Traudl, like in one point of the movie, she gave her a fur coat. She was the one that persuaded Hitler to not execute Fegelein, because her sister was married to him, to no avail.

As the Red Army troops fought their way into the neighbourhood on 29 April 1945, she married Hitler during a brief civil ceremony: she was 33 and he 56. Less than 40 hours later they committed suicide together in a sitting room of the bunker, she by biting into a capsule of cyanide. The German public was wholly unaware of Braun until after her death.

Eva has two sides to her personality: she totally approves of everything Hitler does and does her utmost to comfort him and keep him happy, but whenever he isn't looking or whenever he's occupied, she is spending time with other men, throwing parties, staying fashionable, and enjoying herself in general. She often hangs out with the generals when they're drunk and looks after Traudl Junge whenever she's confused like a mother. Some parodies showed her betraying Hitler (via joining Fegelein's side). Other times, she is shown hanging out (and even sleeping with) Fegelein or Günsche.

Despite adoring her, Hitler threatens with a divorce every once in a while, as shown in "Hitler is informed by Bormann and Eva that Bormann and Eva did not find Fegelein".

Eva dancing. Dolfy would kill Hewel when looking at this...

Eva picking up a cyanide pill to show Traudl and Gerda 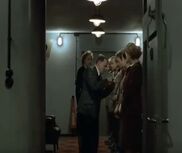 Eva and Hitler saying their farewells 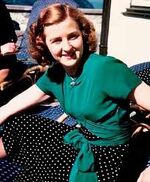 Another photo of Eva

Eva with her sister Gretl

Eva in bathtub
Add a photo to this gallery

Retrieved from "https://hitlerparody.fandom.com/wiki/Eva_Braun?oldid=86800"
Community content is available under CC-BY-SA unless otherwise noted.